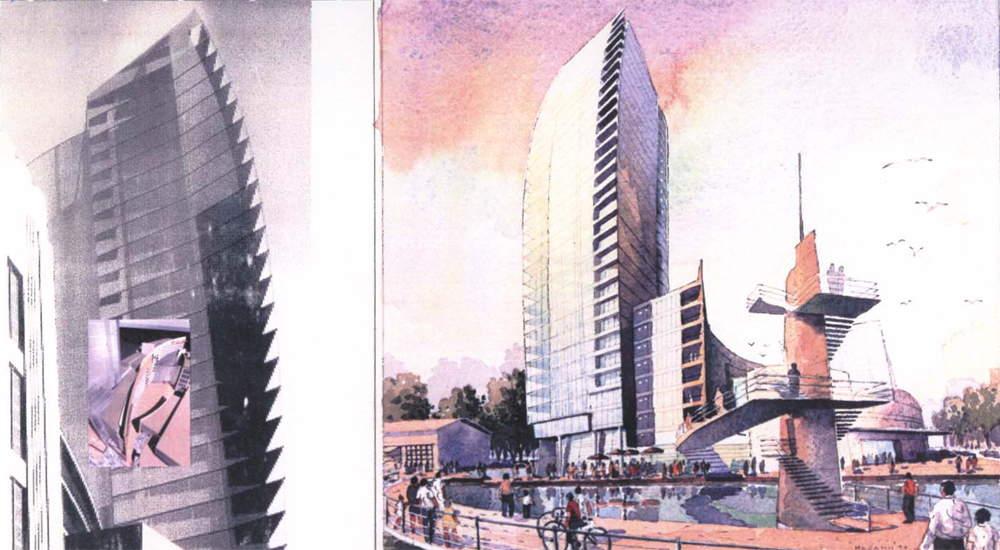 GENERAL INFORMATION ON THE COMPETITION
Editorial
Private competitions: Anamorphosis of profitability
by Jacques Lachapelle , published 2007-01-01
The winning project of Quadrangle and Peter Pran for the competition on the Tip Top Tailors site proposed a deformed curvilinear tower that followed Deconstructivist trends. If this competition was reduced to the simple design of an iconic tower to stand out in the urban landscape, it would be of little interest. This however is not the case.

Launched in 1994, this competition was one of the rare to be initiated by a private company, Dylex Ltd. In the competition outline, the Professional Consultants, Urban Strategies Inc., highlighted the site's wealth of qualities. It was located both at the edge of the Harbourfront - the old port of Toronto successfully redeveloped, and Corona Park in the hip neighbourhood of Garrison Common. Finally, the property itself included the Tip Top Tailors factory, an Art Deco style building recognized for its historical value.

A port and landscape site offering views of the city as well as Lake Ontario, the range of possible sources of inspiration was very extensive. Of the five participants, only Dan Hanganu insisted on a lower volume in order to structure his proposal in response to the existing building. Justifying forms and designs by axes, views, and site opportunities, all the other competitors chose to add a tower in contrast, at times, with the historical building, itself left on its own. The change of attitude is clear: historicism, for some, is a thing of the past.

This process gained popularity amongst developers, who stepped off the beaten path and took advantage of the competition formula. Yet, the winning project was not constructed as Dylex Ltd. was unable to follow through. A single case does not form a rule. Other examples are needed in order to determine whether the competition formula is profitable for the private sector. The CCC includes another such example, the Absolute Design Ideas Competition which also took place in Toronto. The winning team, MAD Office, proposed an elegant deformed tower which, in addition to the Tip Top Tailors case, could incite irony on the anamorphosis which is the current outlet of real estate profitability in urban centres. The attentive comparison of these two competitions reassures us of the serendipity of analyses and solutions proposed by architects.

Description
This competition was launched in 1994, by Dylex Ltd, owners of the former manufacturer Tip Top Tailors. The project's site of 13,200 m2 is located at the edge of Garrison Common and where it meets Harbourfront. This new mixed-use neighbourhood includes cultural, residential and commercial properties, and is tucked into Toronto's old industrial area on the shores of Lake Ontario.

The competition aimed at emphasizing the importance of the site within the port context of Toronto and the exploration of its possible redevelopment potential. It invited candidates to propose programs that would transform current lifestyles and lean towards a flexibility and mixity of functions. The sources of inspiration available in this vast and rich environment are which makes this competition so interesting.

The Tip Top Tailors building, built in 1929 in the Art Deco style, has been on record as a structure of historical significance with Heritage Toronto since 1987. The competition entailed the renovation of this building, including its north-side square and an addition on its back side.

The competition was organized by Urban Strategies Inc. (formerly Berridge, Lewinberg, Greenberg, Dark Gabor) and was won by the firm of Quadrangle in association with Peter Pran of Ellerbe Becket. However, the project was not completed and in 2005, the original building was restored, enlarged, and transformed into residential lofts by its owner, Context.