The Fathers of Confederation Memorial Building 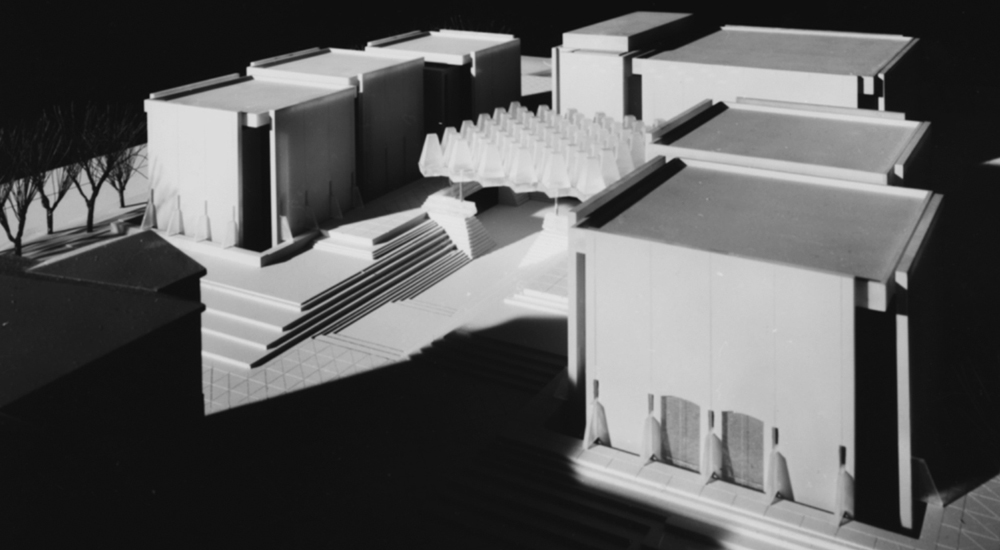 GENERAL INFORMATION ON THE COMPETITION
Description
As Canada's first centennial building, the Fathers of Confederation Building (now the Confederation Center of the Arts) has set an important precedent both in terms of cultural programming and the adoption of a brutalist idiom for the later projects of the Centennial of Canada. The contest was launched as an open contest to any architect member of the Nova Scotia Association of Architects (NSAA) alone or in a consortium. The 6.3-hectare site was to include a library, theater and art gallery surrounding the Memorial Hall. The fourth side was to be dedicated to the preservation of the Province House, site of the first conference of the confederation in September 1864. Among the 47 proposals received, the first prize was awarded to the Montreal firm Affleck, Desbarats, Dimakopoulos, Lebensold, Sise & Schonauer. The contest also had a second prize, two third prizes and six mentions.

The competition for the Fathers of Confederation Memorial Building attracted 47 competitors, and the Jury of Award was most impressed with the standard of design of the majority, and the high degree of imagination which was evident in many.

In general, competitors seemed conscious of the scale of the buildings on the surrounding streets and of the significance, scale and material of the Provincial Building. In the opinion of the Jury of Award, the old building was regarded as a national monument of historic and architectural importance and not as an obstruction, and were greatly influenced by the degree of skill and sensitivity with which competitors incorporated it in the new building complex and the landscaping of the site.

The design placed first by Messrs Affleck, Desbarats, Dimakopoulos, Lebensold, Sise & Schoenauer seemed to the Jury of Award to more than justify the holding of the competition.

As the first building to appear in Canada on the eve of the centenary celebrations for Confederation, it will set a standard of architectural excellence and suitability that will not likely be surpassed. It is rare for the architect in our modern society to be set the problem of a complex permanent building on the town square of a city with a population of only 20,000.

The chief charm of the winning design is its absolute appropriateness to the local scene and the city at large.

Two schemes at opposite poles of design approach - the one highly imaginative with an emotional impact, the other highly ordered in its intellectual precision of form and detail - had bad faults of planning. The jury found no clear distinction which might have argued that one was better than the other; but in recognition of the outstanding conception in each case, decided to tie the two for 3rd prize.

A number of schemes were considered of sufficient merit to be singled out for Mention, in recognition of either good straightforward solutions or unusualness of idea. None, however, revealed a thoroughness of sound planning and conception which could have warranted the award of Prizes or Honourable Mention.

Even at a superficial glance, the spectator is made aware of this competitor's appreciation and sympathy for the historic Provincial Building, and the skill with which he integrates it with the new building. No other scheme shows it such respect. Other schemes have an east, west axis in which the Provincial Building plays a part, but the winner opens up his building on this axis with dramatic effect.

It will be noted elsewhere that the citizen of Charlottetown is able to enter all the departments of the Memorial Building from other parts, but the tourist enters the Memorial Hall on the vital axis of the Provincial Building, and, from there, entrance to galleries and library is straight forward and free from ambiguity.

The competitor has so planned his building that exciting glimpses of the Memorial Hall are obtained from many points of view. There is a civic quality about his building that is given emphasis by the inclusion, so to speak, of the Provincial Building.

His landscaping shows an unusual sensitivity to the layout of terraces and steps, and his preservation of so many trees was commended.

Cars are parked in such a way that they will be largely screened from view.

The jury strongly recommends that so beautiful a landscape will not be marred by the wooden poles that now surround it.

Scale is a subtle element in design related to the human figure rather than to mere size. This competitor achieved a most disciplined group of buildings that respect rather than overwhelm everything in the perimeter, whether church or stores.

The scale set by the exterior is handled equally expertly in the interior and in the delightful planted courts that will give colour and light to many interior rooms.

The more one studies this plan the more beautiful does it seem to unfold in terms of circulation and well proportioned space.

(a) The tourist enters the Memorial Hall which he will undoubtedly enjoy before he proceeds without ambiguity of any kind to gallery or library or museum. Surprising vistas open up before him as he moves.
(b) The general public can enter the various departments of the building from terrace entrances.
(c) The library is accessible at night from the outside when the rest of the building might be closed.
(d) The theatre, too, has an independent life.
(e) The flow of traffic is always in public areas or corridors and never interferes with working areas.
(f) The jury was impressed by the idea of the buildings rising from the datum line, but suggest that the narrowness of the area ways would present problems in maintenance.
(g) The jury suggests that the freight elevators in the galleries are unsightly and deprive the director of much valued wall space. They hesitate to suggest what one might do, but the whole matter of elevators in this area, and book lifts and one elevator in the library will obviously be given intensive study.
(h) Theatre arrangements were more flexible than in almost any scheme. The jury would, however, point to the undesirability of seats at an angle in relation to proscenium productions. It is recommended that seating and lighting on all the acting areas receive careful study.

The Jury of Award is confident that the Memorial Hall will fulfill the high hopes of the Foundation as a noble room in which the architect has expressed the idea of the Founding Fathers by their words engraved in the Stone and by light.

It is also greatly to the credit of the architects that the scale and interest of the Memorial Hall is achieved without domination of the whole complex. It was mentioned on more than one occasion during the judging that the Memorial Hall should commemorate a meeting of Canadians from many walks of life, and that the ideals that led them to the Chamber in the Provincial Building in 1864 could be expressed in a hall where a human, rather than a monumental scale, determined the design.

All kinds of materials were suggested by competitors, but the winning design very appropriately calls for a stone as nearly as possible in colour and texture as the Provincial Building. Other materials equally suitable to the furnishings of the rooms in which they are placed will add enormously to the interest of the interior.

The idea of a unity between the old building and the new is obviously highly desirable, and is in the forefront of this competitor's proposal.

The square footage of this competitor's scheme compared favourably with others, but above all, his solution demonstrated quality without extravagance.


A basically workable solution that is similar in concept to the winning design. However, it lacks appropriate sensibility and an appreciation of the intimate scale required.

Good siting in its relationship to Colonial Building, but lacks subtlety of relationship established by the winner.

Does not have the vistas and glimpses of old building provided by winner. Integration of Memorial Hall well handled within and as means of access to the surrounding elements. Close examination of planning and details revealed a certain meanness and tightness in the fitting of required elements into the various parts of plan.


An elegant, classical concept which has produced an immaculate architecture. However, the jury felt that the competitor did not welcome the Colonial Building on the site.

Examination of the scheme ruled it out for serious consideration as a winner owing to serious faults in planning, particularly the theatre.


An ingenious, brilliant idea in its spiral arrangement of elements around the memorial chamber as a vertical pivot.

Probably provides more of interest and excitement to the visitor than any other scheme, due to variety of exciting vistas.

The scheme is a highly expressive monument which might easily be misinterpreted in symbolism, but which demonstrates an attempt to harmonize with the old through contrast rather than similarity.


A delicate, sensitive, quiet spoken scheme with many delightful features. However, inadequate from the practical planning point of view.


A striking sculptural approach resulting in an impressive spatial, monumental setting for the Colonial building. A delightful carillon. Unfortunately, the plan does not work well and entails the annihilation of the entire tree popUlation on the site.

The jury felt this scheme should be mentioned for its imagination and bravura in spite of the fact that it was highly unsuitable as a solution.


A highly imaginative basic idea with great monumentality. The jury was not convinced of its practicability for it found too many of its questions were left unanswered by the planning and structure as indicated.


The jury felt this scheme should be mentioned for its imagination and bravura in spite of the fact that it was highly unsuitable as a solution.


A formalistic concept which has entailed awkward unsuccessful fitting of the required elements into the arbitrarily chosen forms.