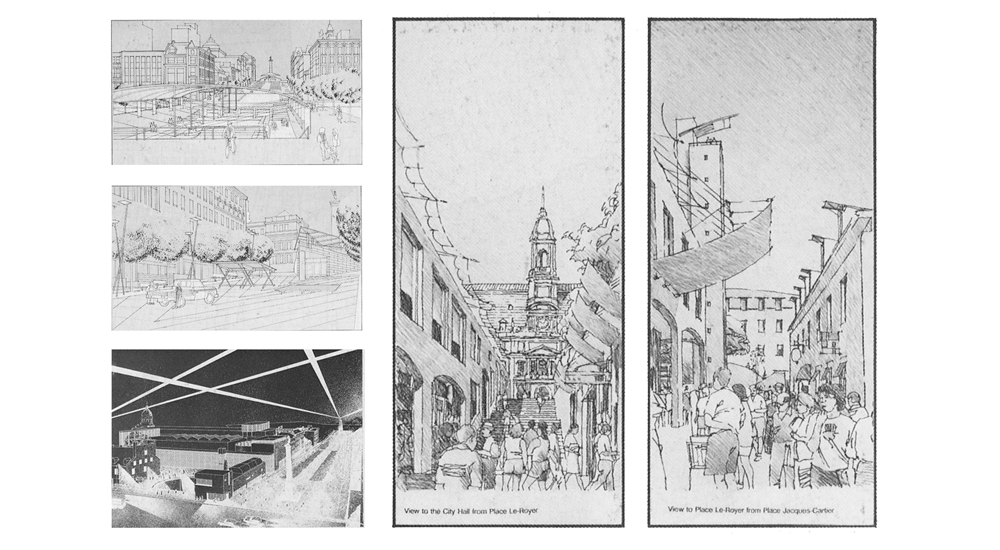 GENERAL INFORMATION ON THE COMPETITION
Description
The City of Montreal (under Jean Doré) and the Ministry of Culture launched the idea competition in 1990 with the aim of gathering proposals from around the world and creating guidelines for the future redevelopment of Place Jacques Cartier. They received 122 proposals from 28 different countries, a scale never before achieved by a Montreal competition.

Located in the heart of Montreal's historic district, the competition aims to redevelop two major public spaces: Place Jacques Cartier and rue Saint-Paul. It also includes two blocks to the east of the square (following the closure of a road tunnel and the demolition of a parking lot), as well as the redefinition of Le Royer, Saint-Claude and Notre-Dame streets.

The aim is to highlight a major square in Montréal's history, to make it an essential axis and a dynamic, contemporary and integrated space. Two objectives were put forward: the extension of the square to create a visual corridor and a harmonious connection between the city and the shoreline of the St. Lawrence River, as well as the enhancement of the historic district.
The main issues addressed are the development and internal organization of Place Jacques Cartier, pedestrian traffic, the connections between the square and the St. Lawrence River and respect for the built heritage.

(CRC translation)
Jury comments
A first prize was not awarded by the jury since none of the members found any project which was absolutely convincing amongst those submitted.

Five equal prizes have been awarded which recognize the different merits of the projects; and two special mentions which the jury wishes to distinguish for their originality while recognizing that they have not met certain requirements of the regulations.

In retaining seven projects and not three as was originally expected, in awarding them equally and in offering them for the attention of the public, the jury wants to make it very clear:
- That no project was completely satisfactory from the point of view of its architectural expression or from the point of view of its ability to respond in a synthetic way to the urban problem which was posed, notably the treatment of Place Jacques-Cartier and its extension in the direction of the river and the planning and design of the blocks at the north-east end of the site;

- that in return, many projects demonstrated a solid professional approach and contained a certain number of ideas which, in the future, could aid in the definition of an urban design framework for this strategic sector of Vieux-Montréal.

This competition, being one for the generation of ideas, the sponsors have clearly indicated that this competition was not for the selection of a project which the author would be automatically contracted to construct, quite the contrary, the sponsors have reserved the right to "... eventually retain one or another of the contestants as consultants or as participants in the implementation of projects". The jury considered that it was desirable, in the absence of a project of very superior quality, to recognize several.

The jury hopes that this part will aid in understanding the difficult problems presented by the Place Jacques-Cartier site and will illuminate the proposals, often fragmentary, often internally contradictory, that were submitted. The interest of this type of competition, which is by its nature rich in information, is as much to identify possible approaches as to identify things to be avoided.