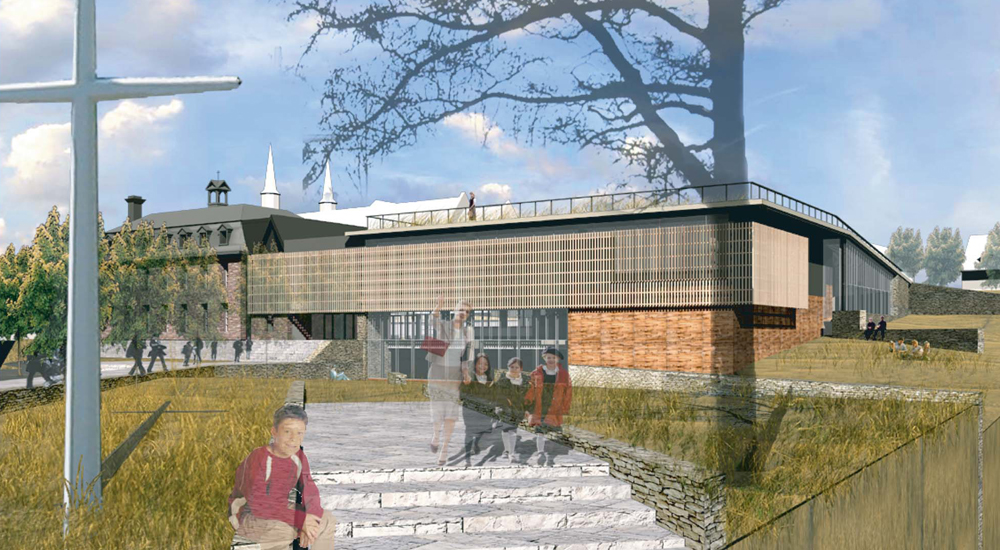 GENERAL INFORMATION ON THE COMPETITION
Description
The competition for the expansion of the Bibliothèque de Charlesbourg was launched in March of 2003. Divided into two stages, the first phase would be open to all architects within the province, of which, five participants would be selected to partake in the second phase. This competition anticipated the selection of a project that would revitalize the Trait-Carré district, by exploiting its views and landscapes, while being situated within a global redevelopment plan elaborated by the City of Québec for this district of Charlesbourg.

The library, housed in the former Collège Saint-Charles (built in 1903), is situated within the heart of a cultural and historical zone. It belongs to a group of heritage buildings dominated by the Church of Saint-Charles-Borromée. The Trait-Carré Seigneurie, established by the Jesuits in 1626, is developed following a radial model. This is a rare example in New-France of a model that permitted the lot of each settler to adjoin a central communal area – the true core of community life. During the 1950s and 60s, the traces of this particular system of land division were threatened by real estate development. In order to preserve this unique example of land division, in 1965 the Ministry of Cultural Affairs declared the Trait-Carré a historical borough.

In addition to better fulfilling the population's needs in terms of leisure, as stated within the competition programme, this facility should equally permit the city to offer entertainment and exhibition activities, contributing to its responsibility of cultural sharing and communication. This expansion project also raised important issues concerning the relationship to built heritage, the planning of public spaces and the expression of a past mode of spatial relationship.
Jury comments
List of Competitors
Competition staff and jury
Calendar
(click French version to see the schedule)
Press Review

Canadian Architect, v.49 n.12, décembre 2004
List of general documents
(not accessible)
IMPORTANT NOTICE : Unless otherwise indicated, photographs of buildings and projects are from professional or institutional archives. All reproduction is prohibited unless authorized by the architects, designers, office managers, consortiums or archives centers concerned. The researchers of the Canada Research Chair in Architecture, Competitions and Mediations of Excellence are not held responsible for any omissions or inaccuracies, but appreciate all comments and pertinent information that will permit necessary modifications during future updates.
info@ccc.umontreal.ca
Production