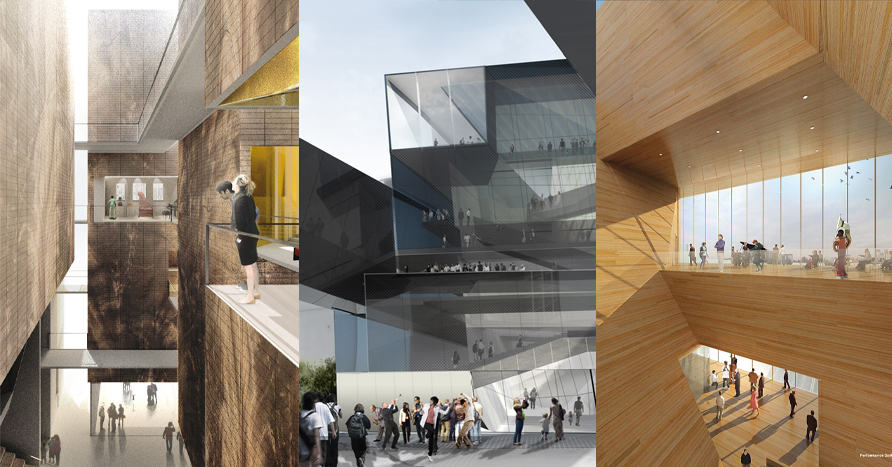 Stage 1
Allied Works Architecture / BKDI (Winner)
Saucier + Perrotte / Graham Edmunds
Studio Pali Fekete Architects
Diller Scofidio + Renfro / Kasian
Jean Nouvel Workshop
winner
Allied Works Architecture / BKDI
GENERAL INFORMATION ON THE COMPETITION
Editorial
National Music Centre of Canada (Calgary, 2009): a top-level summit
by Camille Crossman, published 2014-10-22
There is no dearth of analogies between music and architecture even though both disciplines are carried out in different universes. Music is an art of virtuality: architecture is an art of concrete materials. The competition for the National Music Centre in Calgary - which will culminate with the construction of one out of the five proposed projects -shows that the distinction between virtual and real remains simplistic. Music needs the material conditions of architectural spaces in order to flourish, while architecture offers itself to be enjoyed as early as the project stage, especially when renowned and thorough designers are involved.

Launched in 2009 - with an inauguration planned for 2016 - the competition for the National Music Centre in Calgary (NMC) marks the beginning of a new chapter for that organization, which was founded in 1987. In addition to training musicians of all styles and all levels, the National Music Centre intends to provide a space for artistic representations and to exhibit a collection of over 1,000 instruments. The chosen site for the implementation of the NMC is over two plots, which have to be connected by the building. Moreover, the smallest plot includes a heritage building that must be preserved, enhanced, and integrated into the new construction. Looking at the original program and the unusual site for the project, the competition organizers opted for an international call for submissions. Based on their portfolio, five firms were invited to reflect on this important project dedicated to music.

Comparisons amongst the five projects lead to almost no point of commonalities, except the undeniable and predictable fact that all these proposals present elements, languages, and overall aesthetic approaches reflecting the architectural signature of their authors. We will comment, one after another, on the projects designed by:

All in contrasts, the project by Saucier + Perrotte / Graham Edmunds marks the urban landscape through the articulation of volumes in shades of dark gray, metallic gray, and glass. A glance at Saucier + Perrotte's projects in the Canadian Competitions Catalogue confirms their constant desire for experimentation as well as their loyalty to the sober and poetic aesthetic that highlights the programs they support. In their proposal for the National Music Centre, the Quebec-based team has opted for an architectural promenade that links the different programs and the two plots, while enriching the experience of users and visitors. Bystanders, pedestrians, bike riders, and motorists are not to be outdone: the horizontal frame placed above the street allows people to experience a sense of interiority, thus offering the opportunity to host events and enjoy music while watching the sky.
In turn, Scofidio + Renfro / Kasian's proposal is somehow reminiscent of OMA's Seattle Library with, however, the addition of some sort of immaterial effects, similar to their famous Blur Building. While the envelope and circulations in the project are very freely developed, the program is distributed in a very rational - one could even say rigid - fashion. The small spaces devoted for lessons, yet very transparent, are akin more to cells than to places of creation. One can also question the material realization of the concept and its apparent lightness, which will inevitably be weighted down by the supporting structural elements. Nevertheless, this project is worth being examined as it offers the most unconventional formal exploration, while giving a sensitive response to the notion of urban integration.

While the two first projects proposed to implement separate buildings on the two plots of the site and linked them with a high-rise walkway, Studio Pali Fekete Architects's proposal utilizes the site to generate a raised horizontal block that supports the whole program. Placed on two glass boxes, this horizontal volume connects both plots, frames the street, and strongly asserts its presence at the city level. Furthermore, the volume is pierced by large windows, allowing visual connections between the inside and the outside. A large atrium, which showcases the usage of wood, runs vertically through the very simple geometry of the rectangular block. Between transparency and opacity, the materiality of this proposal is both simple and warm.

Jean Nouvel Workshop's proposal also offers an implementation which differs from other approaches. The project's implementation strategy is very similar to the one developed by Piano and Rogers for the Pompidou Centre: buildings are only on one half of the site and the other half becomes a public square. In his proposal for the NMC, Nouvel suggests a large tower on one side of the street and a public place on the other side. Akin to the Torre Agbar he designed in Barcelona, Nouvel's tower in Calgary acts as a new landmark in the landscape intended to create a real skyline for downtown Calgary. Despite the simplicity of the architectural volumetry, the delamination of the main facade subtly makes the project breath and gives it its own identity. The distribution of the program, though repetitive from floor to floor, proposes to perch the concert hall at the top of the tower: an inversion of concepts typically associated with Jean Nouvel and his team. The project's climax: a public terrace crowning the tower's roof top will showcase Calgary's skyline to the visitors.

Finally, the winning team's project - by Allied Works Architecture / BKDI - is unequivocally reminiscent of their proposal for the Musée national des beaux-arts du Québec (MNBAQ) in 2009. Admittedly, one must not be mistaken about the two projects since the competition for the NMC has indeed been launched a few months before that of the MNBAQ. Allied Works Architecture / BKDI 's project for Calgary offers a surprising geometry. Majestic volumes demonstrate the importance of this new place in the renewal of its immediate urban fabric. Hollows punctuate masses, which has the effect of lightening them on the one hand, and giving them an identity of the other hand. These volumetric subtractions can evoke different analogies, such as resonance spaces, which are fundamental to the acoustics of any concert hall in order to avoid deaf sounds. Similarly, architecture needs space to live, to exist. Even if these volumetric elements are indeed very different from the aforementioned MNBAQ's project, the sensitivity with which materiality is expressed presents, however, unequivocal commonalities. In their two projects, corresponding to two very different cultural contexts, the program's density imposes the presence of compact volumes as well as the use of light-colored surfaces to reduce that density. In turn, these volumes then gain delicacy and even wealth, with shades of beige and gold.

We can conclude by stating that the competition for the National Music Centre of Canada was an initiative of the Cantos Music Foundation, which is responsible for the collection of musical instruments and whose ambitions for Calgary are clear: "Cantos Envisions a world-class destination for public programs, civic engagement, music education, creativity and learning ..."
Or, as the motto written on the main webpage of the National Music Centre (www.nmc.ca) says: "What if visiting a museum was as exciting as going to a music festival? "

Description
Cantos Music Foundation will relocate and expand its operations at the historic King Edward Hotel property in East Village and in the longer term become the National Music Centre of Canada. The King Edward Hotel site was chosen because the hotel's history is steeped in Calgary's early history as a city, due to the hotel's very strong connection to music. As well, the City of Calgary has a long range plan to revitalize the neighborhood where the King Eddy is situated and has committed significant resources toward improving infrastructure in the neighborhood. Finally, long-term, this location is ideally situated be¬cause it is a central connector between the existing downtown, the Calgary Stampede area and the surrounding areas all of which are being knit into the heart of Calgary's downtown urban fabric.

This creative convergence of the Cantos Music Foun¬dation and growth in the city forms a bold new vi-sion for what has been a marvelous but quietly held collection. It is a vision that reaches far beyond existing borders as an arts organization in Calgary and responds to the changing needs of the City and its desire to develop arts and culture that are recognized globally.