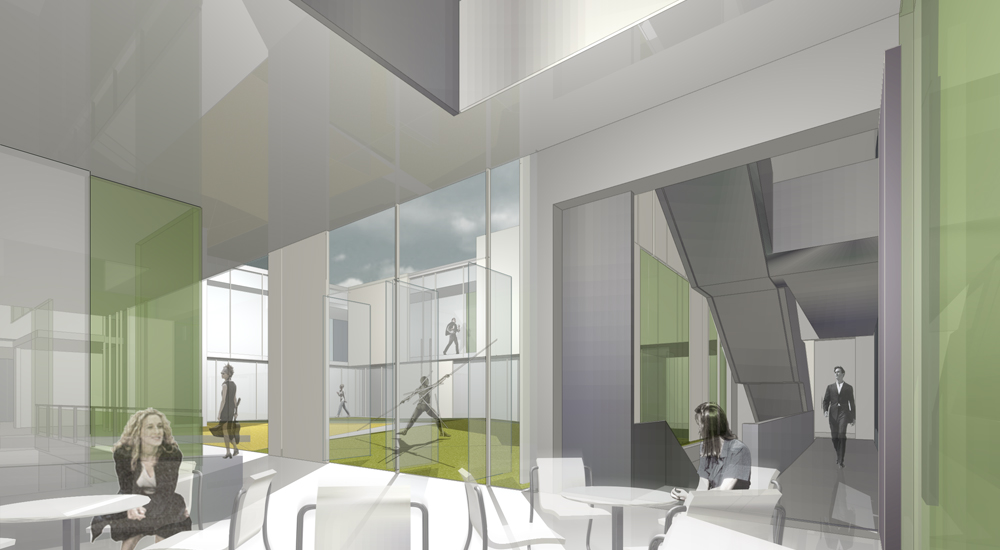 GENERAL INFORMATION ON THE COMPETITION
Editorial
RE-Making architecture's territory
by Jean-Pierre Chupin , published 2006-11-01
Montreal «City of Design», Quebec «Land of Architecture»? The touring exhibition produced for the L.E.A.P. by Denis Bilodeau and for the UQAM Design Centre by Marc Choko and Georges Labrecque does not dispense such simple expressions. It is an extensive project that seeks to grasp nearly 15 years of cultural architecture in Quebec from 1991 to 2005.

Presented until December 17 in Montreal, before heading to Rimouski, Chicoutimi, Paris, etc., this retrospect relates the phenomena of architectural competitions, still rather humble in Quebec and even more so throughout Canada, with «territorial imagination»- which is more deeply rooted. At a time when architectural exhibitions are desperately seeking to become «events» by addressing as little as possible the concrete aspects of architecture (which are not always gleaming, at times far from it), at a moment where political powers are discovering that there is «design» right in front of their noses and that it could contribute to «corporate image», it was important to the L.E.A.P. that we lead an attentive scheme that would seriously compare several dozen projects, whether they were constructed or not. The accustomed browser of the Canadian Competitions Catalogue will undoubtedly recognize a number of these projects, however until now; a comparative analysis was unavailable, as well as a synoptic view, or as photographer Pierre Lahoud would say: «an aerial view!»

In this November update, the CCC presents in detail the three projects conceived by three teams that are among the most active in Quebec, for the Centre de production des arts de la scène Jean-Besré competition (2004) in Sherbrooke. Two of these three projects caught the eye of Stéphane Baillargeon, a journalist at Le Devoir, who in a full page spread published on Saturday, November 18, emphasizes these «salvos of hope». Territory is not always an easy thing for architects to handle, often seeking openness, sometimes choosing withdrawal; they easily confuse territory with «backyard» Over-occupied as they often are with project and construction site details, architects sometimes forget to «consider the bigger picture», or the ways in which their intervention is linked to other architectures. We hope that this traveling exhibition and its richly illustrated catalogue help architects at the least, to re-mark, with a renewed vision, the territory of architecture.

Description
In order to enhance the visibility of professional artistic practice in the Eastern Townships region, the city of Sherbrooke decided in 2002 to construct a performing-arts production centre. Unique to the region, this new centre, dedicated to providing spaces tailored to the production needs of Sherbrooke's professional dance and theatre companies, was to be situated within the heart of Sherbrooke on a city block bordered by Wellington (an important commercial artery), Aberdeen, des Grandes-Fourches, and Dépôt streets. This project is included in an art-facilities development plan aimed at revitalizing the urban fabric of the city centre. The project was also to express its "attachment" to the city by respecting the alignments and architectural scale of the neighbourhood. In addition, proposals were to consider the historically significant CN train station situated near the site and its imminent recycling into a regional bus terminal.
Jury comments
List of Competitors
Competition staff and jury
Calendar
(click French version for schedule)
Press Review
List of general documents
(not accessible)
IMPORTANT NOTICE : Unless otherwise indicated, photographs of buildings and projects are from professional or institutional archives. All reproduction is prohibited unless authorized by the architects, designers, office managers, consortiums or archives centers concerned. The researchers of the Canada Research Chair in Architecture, Competitions and Mediations of Excellence are not held responsible for any omissions or inaccuracies, but appreciate all comments and pertinent information that will permit necessary modifications during future updates.
info@ccc.umontreal.ca
Production