Center for Addiction and Mental Health 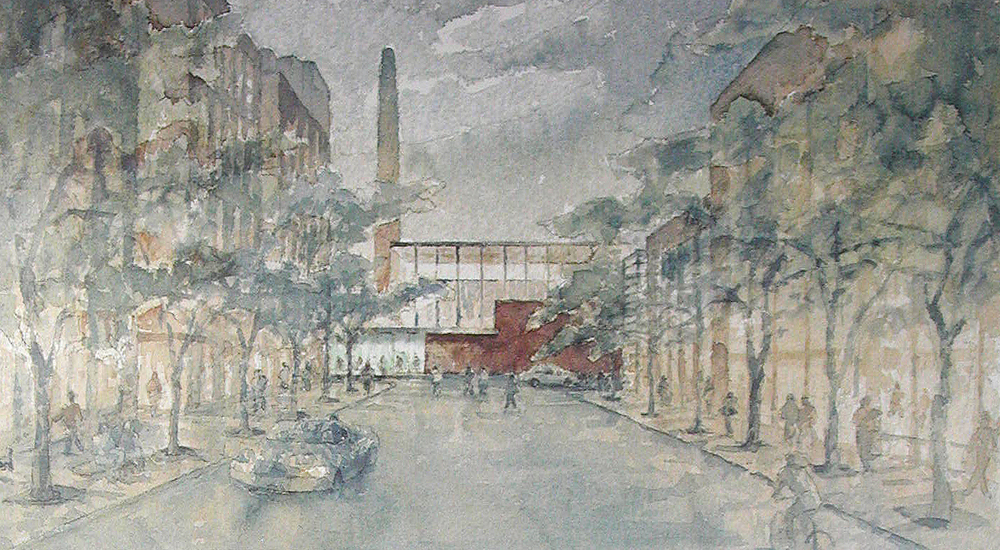 GENERAL INFORMATION ON THE COMPETITION
Editorial
Beyond the wall of mental health
by Isabelle Le Clair + Jean-Pierre Chupin, published 2008-09-01
In this new 2008-2009 academic year update, L.E.A.P. proposes the rediscovery of two complementary competitions organised by the Toronto based firm Urban Strategies. Two events that have not benefited of the attention they were entitled to expect concerning a problematic as delicate as mental health.

These two competitions were organised for the benefit of the Center For Addiction and Mental Health with the help of Urban Strategies in 2001 and 2003. Besides the brief's specificity, it is mostly the nature of a down town Toronto site that needs to be underlined as the major stake of these competitions. An ageing enclave on the verge of being stigmatised at any moment and a place where the undesired are cloistered and that our urban societies are not ready to welcome but rather lock up.

Venerable institution of the mid 19th century, evocatively and worrisomely named the Toronto Lunatic Asylum, is today associated with the University of Toronto's Health Center. The Center for Addiction and Mental Health wished to open itself to the city and the world in order for the new psychiatric methods to benefit from an updated environment. Urban Strategies chose a consultation formula allowing to call upon the public at large. The first competition aimed at a general plan to submit to the Ministry of Health and Long Term Care. The second competition, ‘The Wall', had for an objective to symbolically and artistically qualify the limits of the property. Classed as a historic monument by the Toronto authorities, this wall was to become a threshold and in some ways a public event.

Carried off in the early 21st century by the Community Care Consortium Community Care Consortium (Kuwabara Payne McKenna Blumberg Architects / Montgomery Sisam Architects Inc. / Kearns Mancini Architects Inc.), the Center For Addiction and Mental Health competition has headed a vast thinking process on the role of care facilities in an urban environment. In this era where Montreal painstakingly questions itself on the two mega-hospitals to be created in the next decades, certain decision-makers and commentators could eventually benefit from a prolonged stay… in Toronto! :))

PS : consulting agency of international calibre, Urban Strategies is one of these Toronto firms that strongly contributes to the moulding of big cities such as Toronto, Amsterdam or Buffalo. Through our collaborations, we have regularly noticed their concern in the diffusion of projects and thoughts mobilised in the occasion of competitions (it is thanks to them that we were able to also publish the Tip Top Tailor competition in the fall of 2006). Their engagement to public and private proxies has won them numerous prizes. We allow the L.E.A.P. researchers to join in on our congratulations.

Description
The competition for the Center for Addiction and Mental Health was launched the 3rd of August 2001 with the aim to obtain a series of propositions concerning the development of their property known as the “1001 Queen Street West”. Already, in 1999, the trustees' board had the intention to create a new hub for the institution. The Toronto based firm Urban Strategies inc. then worked with them in order to conceive a award-wining master plan for their vision. It's on these bases that the four participating teams developed their ideas.

The intention was to select a team to realise the final master plan for the property's 27 acres situated on downtown's west side. The installations, in addition to be integrated to the neighbourhood's activities, had to be conceived with an idea of adaptability inherent to the needs of such an institution. It was also an opportunity to give a new image to the site which was occupied by an asylum for 150 years.

Concerning this, the Centre's director, Paul Garfinkel, was quoted in september's 2007 edition of Canadian Architect that it was particularly important that people be treated respectfully and with dignity. This will be possible, according to him, by the creation of an urban village in which all scales, from urban integration to room space, will be rethought. Moreover, with this attitude, it will be possible to free the site from the past negative psychiatry reminders by envisioning a greater consideration of the individual and the setting of his treatment.

John Bentley Mays' article also mentions the intention to scatter places for treatment throughout other non-centre's structures, as suggests Jane Jacobs' neighbourhood urbanism and hospital reformers that would like to see this type of “institutions stitched more tightly into the fabric of urban life and structure.

Out of the four teams compensated to participate in this phase, the winning participant, formed by the offices Kuwabara Payne McKenna Blumberg Architects, Montgomery Sisam Architects Inc. and Kearns Mancini Architects Inc. consortium was to be awarded a contract for the completion of the master plan and its submission to the Ontario Ministry of Health and Long-Term Care.

(leap text)
Jury comments
List of Competitors
Competition staff and jury
Calendar
Press Review
Canadian Architect 04-2006
Canadian Architect 09-2007
List of general documents
(not accessible)
IMPORTANT NOTICE : Unless otherwise indicated, photographs of buildings and projects are from professional or institutional archives. All reproduction is prohibited unless authorized by the architects, designers, office managers, consortiums or archives centers concerned. The researchers of the Canada Research Chair in Architecture, Competitions and Mediations of Excellence are not held responsible for any omissions or inaccuracies, but appreciate all comments and pertinent information that will permit necessary modifications during future updates.
info@ccc.umontreal.ca
Production