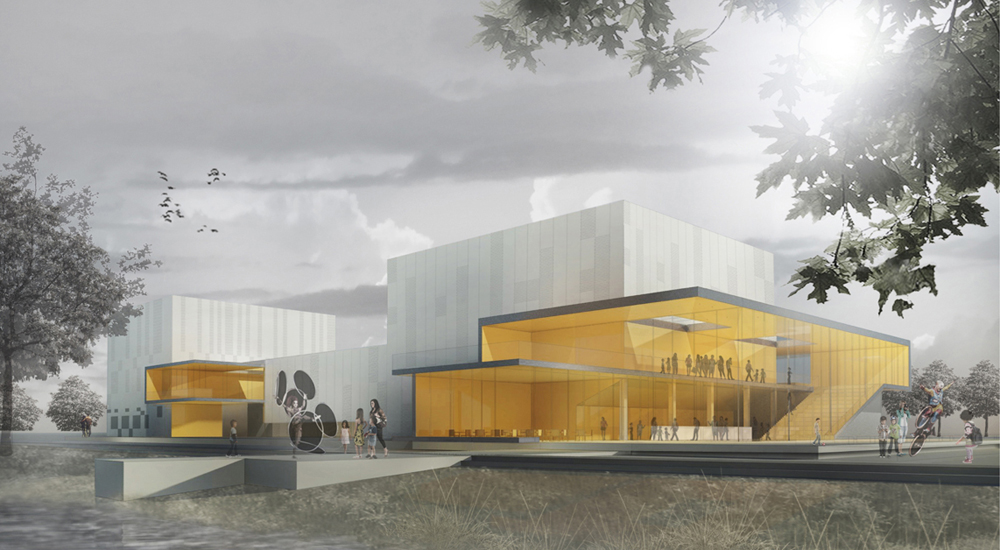 GENERAL INFORMATION ON THE COMPETITION
Editorial
''7 doigts de la main'', four teams, one venue for circus and theatre
by Jean-Pierre Chupin, published 2014-03-19
The competition process is sometimes blamed for delays in the construction of a project. However, the "Centre de diffusion culturel Guy-Gagnon" competition, organized in the Montreal borough of Verdun in 2011, went rather smoothly, with 4 of the better known architectural teams participating, a perfectly functioning jury, and respect of established criteria. Thus, the delays in construction, cannot be attributed to the competition process, but rather to a disregard for financial engagements at the municipal level, an accumulation of political circuses.

In this CCC update, we present a competition whose winning proposal should already be built. This project, of great importance to Verdun, despite its rather modest budget, should not go unnoticed in the history of competitions in Quebec, due to its basis for comparisons, amongst its many qualities. Before discussing the momentous occasion in which four of the top firms were reunited in a single competition for the first time, let us underline a few paradoxes. Firstly, this competition proves that controversies are more often revealed, rather than provoked, by the competition process. The situation is indeed a paradoxical one, as all four projects have already traveled the world, having been published in the 2013 annual edition of the international Competitions magazine, directed in Louiseville by our American counterpart Stanley Collyer. Printed in China, and disseminated by some thousands of copies, the proposals for the Édifice Guy-Gagnon are included in the same volume which revealed the finalists for the famous international competition for the National Museum of Fine Arts in Quebec City, along with other influential competitions organized in Taiwan, Scotland, the US, Germany, Great Britain, or even Denmark. Suffice it to say that these four proposals have already extensively traveled, much like the famous circus troupe 'Les 7 doigts de la main', who made frequent use of this community space along the St-Lawrence, before traveling the world. It remains that as late as autumn 2013, user organisations were still attempting to mobilize the municipal players, hoping to gain leverage from the oncoming municipal elections, in order for funds reserved and duly destined to the École de cirque de Verdun (ÉCV) to finally be invested.

The order called for the redevelopment of an old arena, transforming it into a centre for the promotion of performing and circus arts, including a performance hall with seating for approximately 400 individuals. The terms of the competition clearly demonstrated its ambitions: "In order to obtain an architectural work or great quality, translucence, material eloquence, and inventiveness must be displayed. The renewal of this building demands a remodelling of the envelope, in harmony with its site on the banks of the St-Lawrence." What draws our attention, in this short editorial summary, concerns the functioning of the judgement with regards to well-defined criteria, always respected by the jury throughout the process. The two published jury reports clearly summarize the way in which the teams were selected, before summing up the stages in the judgement of proposals. This level of detail is rare enough to warrant notice, for jury reports often water-down or even omit information. This is a shame, as reading a true and detailed report can afford one a glimpse into the dynamics and issues of the jury process, and we come to the realization that the risk of controversy is thus diminished.

Four teams spearheading the advancement of architectural quality competed on this occasion. Éric Gauthier represented FABG, Manon Asselin the TAG/JLP consortium, Gilles Saucier and André Perrotte their eponymous agency, while Dan Hanganu also represented his team. The judgement must not have been easy, as both quality and experience were indeed present in all competitors. FABG's project emerged victorious due to its great spatial flexibility, a necessity for versatile equipment, as well as the promise of the lateral hall, lit up in warm amber and opening up towards the river. All proposals drew first from the site's riverside potential, favouring its importance over that of integration into the urban fabric. For Saucier + Perrotte, it was a question of "profiting from the bucolic character of the site by creating an architectural form that would impose itself upon the landscape in a unique manner." A unification strategy for the programmatic elements allowed this team to work on covering the built entities in unabashed monumentality, a powerful form, and characteristic of the research of this renowned team. An analogous ambition emerges from TAG/JLP's proposal, with, in addition, an oft-perceived exaggerated emphasis on "potential heritage." That is to say, the designers displayed it as the fifth element of a monumental sequence of "modern architectural heritage of the river landscape in Montreal": a sequence beginning with the cross atop Mount Royal, passing through the Biodome, the French Pavilion at Expo 67 (now a casino), and Habitat 67 to finally end in Verdun - no risk of comparison here! With a project that may reveal itself somewhat more tormented, in comparison with the great conceptual sobriety displayed by FABG's "neutral" proposal, Hanganu's team worked, on one hand, the idea of dual frontality (a challenge it seems immediately abandoned by the other teams), all the while articulating these facades in what has become Hanganu's signature: a large, modern central space on two levels, lit from above in a way destined to set the city in relation to the river's edge in an architectural promenade.

What were the judgement criteria that guided the process up until the final jury report? Under the rather vague emblem of a "strong identity", five qualitative levels were gauged: 1- Atmosphere (an ancient term once again fashionable, but overall rather ageless), 2 - the quality of the relation of the building to its site between river and city, in an effort to include transparency, 3 - the functionality and innovation of the entity (a possibly paradoxical double injunction, but those are often necessary to get designers thinking), 4 - volumetric questions and questions of integration and materials, and 5 - (the inevitable) "technical feasibility and potential to respect the budget". We will not paraphrase here that which the jury report took the time to summarize, for each project and with regards to the criteria. Rather, we will invite readers to consult the actual report under the "General" heading in the competition's page, where they will discover excellent proposals which constitute, once gathered, a true example of what history will no doubt come to call the "Quebec school of the 2000's".

All these architects participated in the broadcasting of a culture of innovation, and most of all to the edification of a Circus - with a capital C - which has absolutely nothing derogatory when one takes the measure of Quebec's international level of expertise in this domain.
Description
In 2011, Ville de Montréal, borough of Verdun, launched a design competition, in order to promote the construction of a new cultural center in Guy-Gagnon building, situated at 5190, Lasalle Boulevard, in Verdun. The building, formerly an arena, will be expanded and redeveloped, in the part commonly called Studio B, as a diffusion center for the circus and performing arts, which will include among others a theater and a show room.

- 17 novembre 2011. To design its new cultural venue - the Verdun borough announces the names of firms in the running, States News Services.

- Siag, Jean. 20 juin 2012. Québec allonge 3,3 millions pour l'École de cirque de Verdun, La Presse.
List of general documents
(not accessible)
IMPORTANT NOTICE : Unless otherwise indicated, photographs of buildings and projects are from professional or institutional archives. All reproduction is prohibited unless authorized by the architects, designers, office managers, consortiums or archives centers concerned. The researchers of the Canada Research Chair in Architecture, Competitions and Mediations of Excellence are not held responsible for any omissions or inaccuracies, but appreciate all comments and pertinent information that will permit necessary modifications during future updates.
info@ccc.umontreal.ca
Production