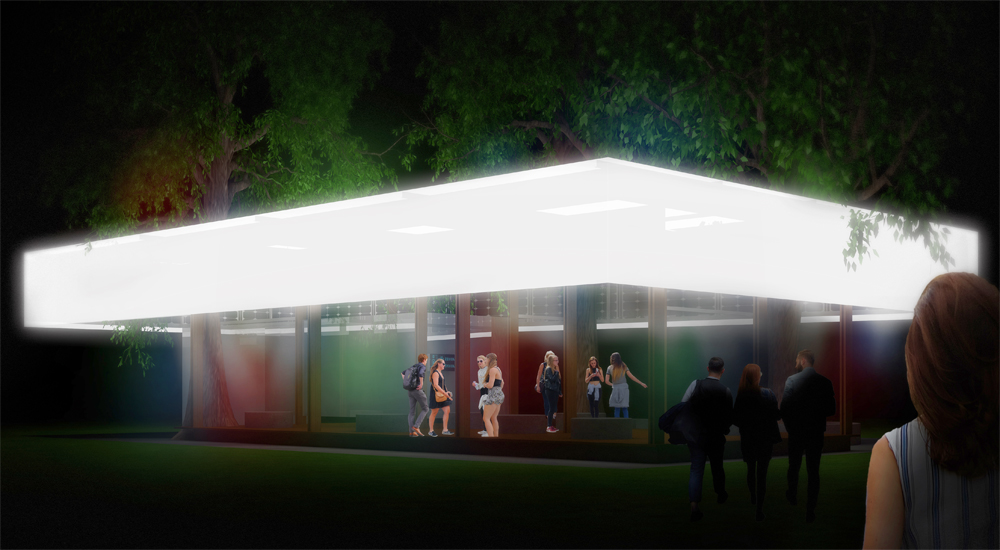 GENERAL INFORMATION ON THE COMPETITION
Editorial
Waiting For The Bus While Reflecting On Climate Change
by Cheryl Gladu, Carmela Cucuzzella, published 2016-06-30
Contrary to the famous aphorism by architectural historian Nikolaus Pevsner who did not recognise the bicycle shelter as architecture, this competition was grounded on the conviction that a bus shelter can, and should be as architectural as a cathedral or even a museum. With this open and anonymously judged competition which received 26 proposals from Canada, USA, Brazil, France and Iran, the ideas had to be feasible since this augmented bus shelter will indeed be built by the not profit organisation CoLLaboratoire from Concordia University.

A boundary breaking exercise in community engagement around the issue of climate change, CoLLaboratoire, is a research project of the Concordia University Research Chair in Integrated Design, Ecology, And Sustainability for the Built Environment (IDEAS-BE). This competition was the first of a series of design challenges and was launched on April 15, 2016. The aim of this initiative is to successfully make connections between artists, designers, architects, professionals, academics, community members, and business leaders in order to better address sustainability challenges together. The installations are to be context sensitive, taking into consideration the concerns of the community within which they are intended. CoLLaboratoire has adopted the urban corridor of Sherbrooke Street in Montreal, which runs 31km east to west of Montreal, as an organizing principle for all future urban installations. For this inaugural competition, CoLLaboratoire partnered with the NSERC Smart Net-zero Energy Buildings Strategic Research Network and the Centre for Zero Energy Building Studies, directed by Dr. Andreas K. Athienitis, in order to assist the winning team to incorporate solar power into the final phase of design and construction, as well as in the early conceptual phase when major decisions about orientation and form are made. The Université de Montréal Research Chair on Competitions and Contemporary Practices in Architecture was also part of the project bringing along the expert team of the Canadian Competitions Catalogue.

The project challenge consisted in designing a bus shelter at the Loyola campus of Concordia University, considering the extreme weather conditions of Montreal and which may also be used for other activities during non-peak hours, while creatively including the potential of solar energy. Teams were encouraged to develop ideas that can both contribute to educate and encourage public conversation that might heighten awareness around climate change issues. The proposals were to be sufficiently documented technically and the teams were asked to be ready to interact with the CoLLaboratoire team in order to complete the detailed design within the budgetary restrictions.

There was a vast array of responses to the brief, ranging from projects that chose to focus on symbolic gestures to those that were completely pragmatic in their approaches; from easily buildable to overly complicated parametric designs (for a bus shelter); from the all too obvious exhibition of solar panels on basic architectural forms to the sophisticated adoption of new solar technologies discreetly hidden in elegant forms; or from site focused designs to object focused designs, the idea of a shelter by young designers from various parts of the world is quite diverse.

Three proposals were selected as originally announced, but the jury decided to add two honourable mentions. An art historian, a gallery director, an expert in solar energy, two architects, an interdisciplinary designer, and a doctorate candidate comprised the jury. This short editorial meant to coincide with the unveiling of the winners can only briefly comment on the 5 selected projects and the public vote. A more comprehensive jury report will be released later in July.

The first prize went to a project that displayed a bold architectural proposition, with an elaborate, yet clear reinterpretation of the 'bus shelter' (team: Guertin/Amiot-Bédard/Desharnais/Duchesne/Cloutier-Laplante/Côté). The panels and the text were concise enough to underline how the team proposed to incorporate the existing vegetation into the shelter and the sophisticated manner in which the solar panels could be integrated into the floating canopy, which glows at night. In addition to being elegantly minimal while providing both interior and exterior shelter, the designers allowed themselves to be inspired by one of the key challenges of this site: the presence of a large canopy of trees. Just as the trees work to transform the sunlight into oxygen, the proposal collects energy in order to create a night-time beacon, providing a feeling of security for users of the shelter over the darker months that make up the majority of the school year.

The second prize also proposed a poetic gesture for the site, alluding to a lighthouse in its design (team: Proulx/Guinard). The project has a light touch, and relatively low-tech approach to demystifying solar energy production. The proposal, which included the addition of a delicate installation for social gathering adjacent to the original, albeit refurbished, shelter had great symbolic potential as a landmark, however remained too deferential of the design of the existing bus shelter.

The third prize was innovative in form and composition and extended the program of the bus shelter by proposing a structure that might also be useful as a weekend market (team: Tardif/Yesayan). The proposal stood out for its distinctive, variable form, as well as its playful and interactive approach to solar power production. However, the design did not seem capable of providing true shelter from the extreme weather conditions common in Montreal.

The two honourable mentions were selected for their pragmatic approaches. One of these doubled the capacity of the shelter, by designing a structure that straddled the path to the Vanier Library, thus allowing for an extended interior program, such as the inclusion of a sharing library within the shelter (team: Moro/Tornich/de Oliveira/Junger). The second designed a series of modular shelters that can be combined in a variety of permutations to increase the capacity of the shelter while revealing perhaps too directly the solar technology (team: Montani/Zanlorenzi/Paris/Kashala/Hirayama/Shinohara).

The last prize was a popular prize where we received almost 1600 public votes through the competition's voting platform: http://www.ideas-be.ca/competition-submissions.html. The majority of the public votes went to projects from Brazil (over 900 public votes), while a considerable amount focused on the project entitled 'The Rising Hill', by team Coulon/Han/Mourtada/Quintero, which received 196 votes. Our analysis cannot yet conclude if this type of public vote indeed concerned the projects or confirms the solidarity of the social networks of the various teams.

This unique competition offers a rich diversity of innovative responses by young designers and will be interesting to compare the winning proposal with its technical realization, which will coincide with Montreal’s 375th anniversary.

The project consists of designing the shelter(s) at the Loyola campus of Concordia University, which will also include solar energy. The participants may or may not use the existing structure. Teams will develop ideas that can both educate and encourage public conversation that might heighten awareness around climate change issues. The proposal should be well documented technically and intended for further development.

This first installation is intended to be built on Concordia's Loyola campus. It will represent the first of a series of interventions that will be planned over the next few years, bringing public space interventions along the entire axis of Sherbrooke Street across Montreal. In this inaugural experimentation, we are partnering with Concordia's NSERC Smart Net-zero Energy Buildings Strategic Research Network. Submissions are encouraged to consider the use of solar power - this may be centrally featured in the design, or simply a means to power the project without reliance on the grid. Technical assistance to realize this will be available to the team with the winning design. In addition to the build-out of the winning project - there will be an opportunity to showcase selected project submissions as part of a celebration of the CoLLaboratoire's public launch via a public and virtual exhibition of ideas in 2017 in the Canadian Competitions Catalogue.

The location of the design intervention is in Notre Dame de Grace (NDG), Montreal, Quebec on the Loyola Campus of Concordia University. The site is currently a large, utilitarian shuttle bus shelter found on the north side grounds of the campus. The shelter site is adjacent to Sherbrooke St. West and the Vanier Library building of Concordia University. While on the University's private grounds, the site is highly trafficked, with more than 2,300 people embarking on the shuttle bus at Loyola campus on a daily basis. The shuttle does not operate on the weekends and runs on a reduced schedule in the summer. Innovative programing for these non-peak times is encouraged. We invite participants to think creatively about the site, while any intervention should not get in the way of the site providing actual shelter from the weather for shuttle bus users. It could be so much more than just a bus shelter! It could be a refuge of a whole new sort, which may include any or none of: green walls or roofs, charging elements, heating pads, innovative roof tops, thermally modified materiality, weekend market shelters etc. What else might people seek shelter from? What else may the shelter provide?

(Program excerpt)
Jury comments
General Criteria:
1. Imaginative shelter design (form, materiality, spatial qualities, etc.);
2. Innovative interpretation of the idea of 'shelter' for the Loyola campus site;
3. Incorporate solar energy and provide details of its use;
4. Consideration on how the impact of your project might be measured over time (eg.: the number of mobile devices being charged per day using the solar power).

The maximum allowable budget for the project build-out is $23,000 (all taxes included).
Site: http://www.ideas-be.ca/collaboratoire.html


The jury examined the criteria and agreed to their adoption for the deliberation of the projects. The jury agreed that the selection should consider that the design must be comfortable in winter and in summer.

With these criteria, each project was carefully reviewed. There was a vast array of responses to the brief, ranging from projects that chose to focus on symbolic gestures to those that were completely pragmatic in their approaches; from easily buildable to overly complicated parametric designs (for a bus shelter); from the all too obvious exhibition of solar panels on basic architectural forms to the sophisticated adoption of new solar technologies discreetly hidden in elegant forms; or from site focused designs to object focused designs, the idea of a shelter by young designers from various parts of the world is quite diverse.

A first process of selection was conducted where we kept 11 of the 26 proposals. From this list, 5 projects were selected. The jury unanimously agreed on teams 35, 06 and 45 for the top 3 prizes. The jury also unanimously agreed to add two honorary mentions to the list of awards for their merits regarding modularity and expansion of site.


(Program excerpt)
Press Review
List of general documents
(not accessible)
IMPORTANT NOTICE : Unless otherwise indicated, photographs of buildings and projects are from professional or institutional archives. All reproduction is prohibited unless authorized by the architects, designers, office managers, consortiums or archives centers concerned. The researchers of the Canada Research Chair in Architecture, Competitions and Mediations of Excellence are not held responsible for any omissions or inaccuracies, but appreciate all comments and pertinent information that will permit necessary modifications during future updates.
info@ccc.umontreal.ca
Production