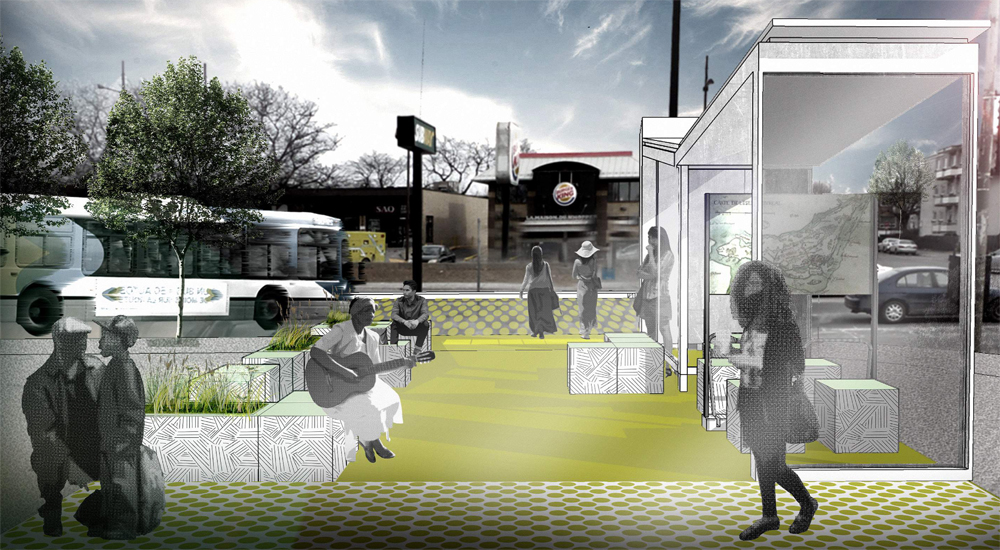 The chosen slogan, "MORE THAN WAITING FOR THE BUS" invites designers to reflect on contemporary approaches that can help invigorate these spaces in interactive, poetic, critical and meaningful ways: from solely utilitarian to more multi-purposed spaces surrounding bus stops.
Jury comments
Mr. Peter Fianu was unanimously named president of the jury, while Dr. Carmela Cucuzzella, co-organizer of the competition, was named the competition consultant for the jury, without being part of the jury deliberation. Ms. Christelle Kouotze was not able to be part of the jury deliberations, which took place on April 10th, 2017 at Concordia University.

This is an excellent presentation. The jury appreciated the ground work and the different degrees of porosity and animation of the site. The idea of a "body machine" operating at the scale of the site is very interesting and the drawings - very elaborate and very well realized - show that it could work. The environmental principles are very well formulated. The networking of such a system would find its meaning both locally and globally.

An exceptional project, elegant and truly urban that could have been the first place winner. The proposal truly grasps the context. Including the automobiles from the nearby parking, the project constitutes a public space where the stands provide a social space for waiting. Removal of the bus shelter was not necessary, however.

The degree of elaboration of the drawings is particularly detailed. The overall quality of the presentation is excellent and the proposal offers an intimate scale which was highly appreciated by the jury.

The jury was particularly sensitive to the approach that led to this project, rather than to its aesthetic qualities. A series of rotations, additions and transformations manage to literally "absorb" the bus shelter. The resulting project is as tough as it is resistant. The public space is really busy and the users are invited to reappropriate the public space.
List of Competitors
Competition staff and jury
Calendar
February 2, 2017: Registration Opens
February 16, 2017:
Competition Launch: full brief released online
March 2, 2017: Presentation + Only Forum of Questions Event - at the Maison du développement durable (MDD)
March 17, 2017: FAQ's to be published
March 24, 2017: Registration Closes
April 7, 2017: Competition Submission Deadline at 5:00PM EST
April 10, 2017: Competition Jury Meeting
April 19, 2017: Event for the Announcement of the Winners - online and at MDD)
Press Review
List of general documents
(not accessible)
IMPORTANT NOTICE : Unless otherwise indicated, photographs of buildings and projects are from professional or institutional archives. All reproduction is prohibited unless authorized by the architects, designers, office managers, consortiums or archives centers concerned. The researchers of the Canada Research Chair in Architecture, Competitions and Mediations of Excellence are not held responsible for any omissions or inaccuracies, but appreciate all comments and pertinent information that will permit necessary modifications during future updates.
info@ccc.umontreal.ca
Production