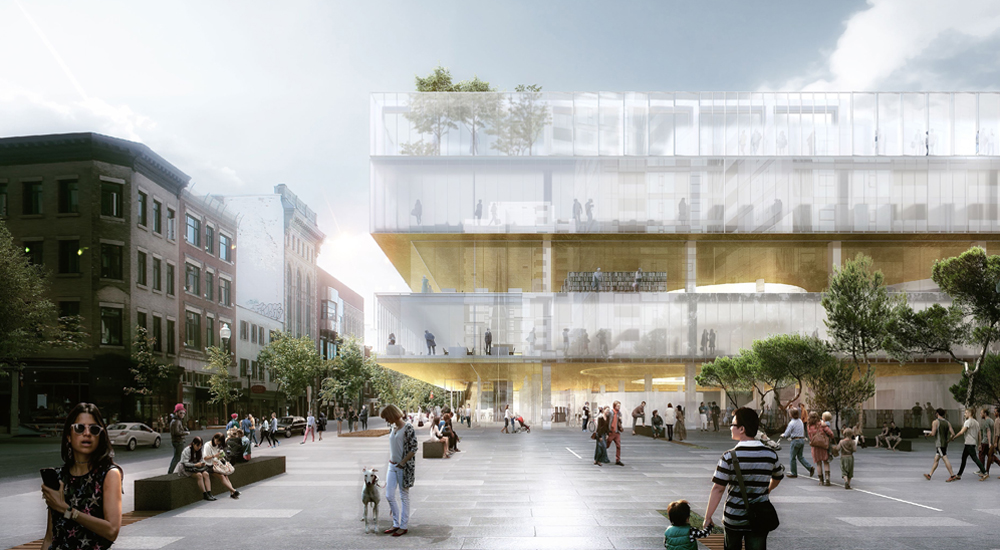 GENERAL INFORMATION ON THE COMPETITION
Editorial
The metamorphosis of a library: from opacity to transparency
by Alexandra Paré, published 2018-09-16
Since the year 2000, more than fifteen architectural competitions aimed at rethinking libraries have been organized in Quebec. The recent Gabrielle-Roy library competition is a perfect example of this desire to change institutions dedicated to knowledge. Architecturally, it questions the contemporary trend towards dematerialization, which has been particularly explicit here due to the formal and massive architectural expression of the old library designed by Gauthier Guité Roy decades earlier. It also questions the paradoxical desire to create spaces that are well adapted to specific uses while being very flexible and versatile.

In March 2017, the City of Quebec launched a single-phase competition for the renovation and expansion of the Gabrielle-Roy library located in the heart of the Saint-Roch neighbourhood. This competition sought out to transform Quebec's first large modern library into a so-called third generation library, offering not only quiet spaces for reading and study, but also dynamic areas for meeting, creating and exchanging knowledge.

Inaugurated in 1983, the Gabrielle-Roy Library was the first public library in Quebec to have a large atrium, a theater for performing arts and multifunctional spaces. It has since been a pioneer though its services (art collections, sound, video and map archives) and various cultural activities. Since its opening, it has also greatly contributed to the revitalization of the neighborhood (which was then quite neglected) and greatly boosted the social and cultural life of the Lower Town.

A former working-class neighbourhood, Saint-Roch gradually became a trendy and creative area with the arrival of students, artists and professionals, and changed immensely in terms of its urban planning and architecture. In 2014, two important elements of the library, the Joseph-Lavergne auditorium and the exhibition center located on Place Jacques-Cartier, were demolished to make room for a huge twenty-story residential tower. The disappearance of these two major spaces and the imposing presence of the Fresk Tower led the city to launch a competition to transform the original building in order to give back its cultural spaces as well as bring it back at the forefront of North America libraries.

With a $ 40-million envelope, the architects' mission was to modernize the library by preserving its skeleton and atrium and to enlarge it on Saint-Joseph Street. The main elements of the program were the following: nine thematic foyers spread over four floors and encompassing the 220,000 documents in the collection; spaces for relaxation, learning and creation at the heart of each of foyer; and, an auditorium with a connected foyer. It had to therefore revolutionize the current concept of libraries in order to make it not only a place of knowledge but also a meeting space and a hub of creation through cooking workshops, music studios, etc.

Following the pre-selection phase of the competition, four teams were invited to transform the former Gabrielle-Roy library into one of the most innovative literary, cultural and social institutions.
• Lemay / Groupe A
• Hanganu / BMD
• Chevalier Morales / ABCP
• Saucier+Perrotte / GLCRM

The jury, chaired by Lise Bissonnette, was very attentive to the integration of the new library in the neighbourhood and the aesthetics of the outer envelope. They carefully examined the spatial organization of the nine thematic foyers and the clarity of the circulation within the building. The location and treatment proposed for the auditorium were also important points. On the other hand, the significance given to the animation portion of the thematic foyers did not seem to have been as determining a factor as the competition program implied.

Of the four finalists, Lemay / Group A's proposal is the only one to have explicitly referred to the former library. The architects were keen to preserve the original atrium as well as elements of the original masonry. This gesture to protect the collective memory has been praised by the jury. The innovative aspect of the project lies in the creation of dynamic spaces alternating between center and periphery, intimacy and animation. The atrium becomes an agora, a large collective space while the vertical circulation takes place at the front of the building. Despite the quality and diversity of the interior spaces, the jury was not persuaded by the proposed path from one floor to another. Furthermore, the addition of vertical slats on the exterior facade as well as the perimetric treatment of the atrium negatively impacted the project in the jury's eyes. These visual elements separate and enclose the building instead of opening it and connecting it to its environment, an architectural quality that was put forward in the competition program.

Hanganu / BMD's proposition asserts itself in the urban landscape. The presence of a huge white wall, a kind of monumental arch, on the side of Place Jacques-Cartier contrasts with the glass facade overlooking St. Joseph Street. This feature, however, separates the building from its urban environment and doesn't make for an inviting place. The strength of the project lies in the design of various sub-spaces within the building which offer convivial environments for reading and meetings. However, the jury seemed to have had difficulty understanding the proposed architectural concept and was concerned about the complexity of the spatial organization and circulation.

The concept developed by the Chevalier Morales / ABCP team caught the jury's attention by the rich spatial experience created by decentralizing the stairs, which have been thought of as "objects of desire" that would attract the user and offer a surprising journey through the thematic foyers (straight brick staircase, spiral staircase, monumental brass staircase). But this bold approach also worked against the project. The jury pointed out the risk of spatial confusion generated by the stairs and the tendency for users to favor the elevator, making the idea irrelevant. This rejection may be surprising when you consider the staircase as an architectural symbol of the progression towards knowledge which certainly deserves to be rethought and emphasized in libraries. The multiplication of entrances according to a cruciform plan which aimed to transform the ground floor into a real public square, place of transition, convergence and exchange has also disadvantaged this project. The jury raised the noteworthy problems created by this spatial configuration which makes the management of documents and building security difficult. Evidently, this attempt to rethink the typology of the library did not convince the jury.

Saucier+Perrotte / GLCRM's proposal was unanimously approved by the jury for the clarity of its concept and the role it gives to light, presented here as a metaphor for knowledge. In contrast to the old library dominated by opaque facades and brick (a legacy of brutalist architecture), the architects focused on transparency, openness and light. The glass envelope, alternating between opacity and transparency according to each floor's theme, introduces abundant natural light into the interior spaces. The main entrance is accentuated by the parvis, which extends into the interior, thus accentuating fluidity. The atrium of the former library, now elliptical in shape, diffuses the zenithal light at the heart of the four floors and highlights the scintillating work of Micheline Beauchemin. A winter garden adjacent to the main entrance skilfully provides natural light in the administrative areas located in the basement. One of the main elements that conquered the jury was the judicious location of the theater on the side of St. Joseph Street and its independent access. A room that will certainly become coveted with its foyer and outdoor terrace overlooking St. Joseph Street from the third floor. The weakest part of the project concerns the layout of the thematic foyers. The architects designed the most open spaces possible to remain flexible for future changes. An architectural parti generating refined, almost banal, interior spaces. The clarity of circulation thus outweighed architectural innovation. Despite the reservations it raises, it is a choice that has proved successful. By its apparent interior simplicity, the project won the competition, which did specify in its program a specific spatial identity for each of the theme foyers. On the other hand, other competitors, taking the risk of creating heterogeneous spaces and atmospheres, have generated spatial organizations and complex circulation that have played against them.

By the time it opens in 2021, the Gabrielle-Roy library will undergo a profound metamorphosis from opacity to transparency, an architectural parti adopted by all the finalists but brought to its peak by the winning team. The new institution will be welcoming, bright and open.

(Translated by Maxime Leblanc)
Description
The current building housing the Gabrielle-Roy library, covering an area of ??8,369 m2, requires major renovations; the state of obsolescence of the installations has caused the complete closure of the underground parking since September 2007, leading to the closure and demolition of the exhibition center and the Joseph-Lavergne auditorium. The Library's modernization and expansion project includes the refurbishment of the existing five floors (including the basement), the refurbishment of the existing building envelope and the construction of a street-side extension. Saint-Joseph East to offer the new library a gross area of ??nearly 10,500 m2.