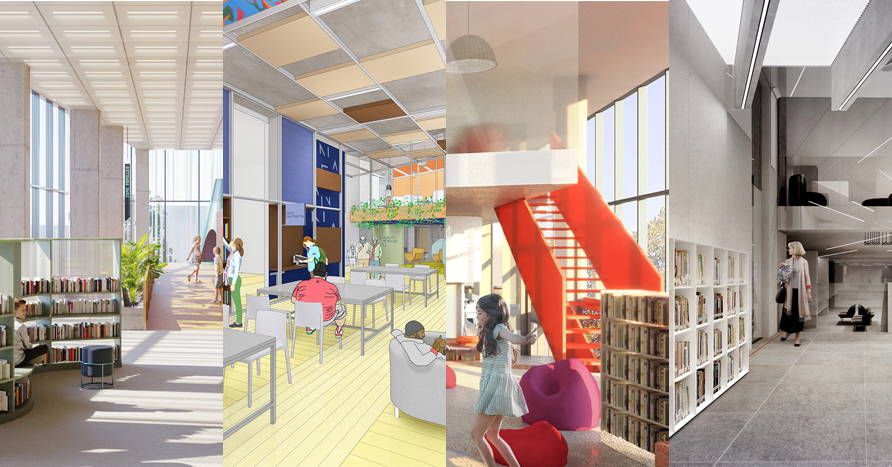 Stage 1
Architecture49 + Pelletier de Fontenay (Winner)
Atelier Big City + Rayside Labossière (Finalist)
EVOQ Architecture (Finalist)
Chevalier Morales (Finalist)
winner
Architecture49 + Pelletier de Fontenay
GENERAL INFORMATION ON THE COMPETITION
Editorial
Open hands at the future SANAAQ Center
by Joëlle Tétreault, Jean-Pierre Chupin, published 2021-12-09
Community centers are places where a community can meet and exchange ideas and practice recreational, cultural or social activities. The sense of attachment of various communities is built there. But designing spaces that promote diversity and inclusion remains a complex process. In response to criticism from Makivik, a representative organism of the Inuit of Nunavik, Peter McGill's center has been renamed the SANAAQ Centre, a term inspired by an Inuit book by author Mitiarjuk Nappaaluk from 1950, which refers to something made by hand. This concept of an open hand or a making hand is certainly what brings the goals of the competition closer to the future appropriations of the community center. The mayor of the city of Montreal, however, will be accused of cultural appropriation in a controversy revealing that the valorization of indigenous cultures announced in the program of the competition has not been realized as planned.

Since 2013 the western area of the Ville-Marie district has been considered a priority for the construction of a new community library. The absence of gathering places, the lack of space for community organizations, and a scarcity of cultural and recreational activities on the territory were identified as deficiencies in services in the Peter-McGill district, requiring a competition.

In the spring of 2020, the City of Montreal issued a call for applications for a multi-disciplinary competition to develop the Sanaaq Community Centre (initially Peter McGill’s center) on the site of the former Montreal Children's Hospital. The designers had to deal with plans offering 5310m2 of gross floor area and a budget constraint of $13,853,942 before taxes in order to create a library, a performance area, workplaces and several other community spaces. As a district with a growing and diverse demographic, the Ville-Marie district is counting on a complete redevelopment of the site, combining a community center, social housing, green spaces, commercial spaces and offices. The rules required that each team consist of at least 8 professionals working in specific disciplines from architecture to mechanical engineering. Four teams were selected by a jury composed of : Jean Bouvrette, Alain Carle, Amélie Harbec, Paul Laurendeau, Sophie Mayes, Daniel Smith and Gina Tremblay.

The vision statement of the development project invited the teams to define the Peter McGill Centre as an oasis that places people at the heart of its actions. This statement brings together the five visions of the competition to transform the district into a "nerve center and a laboratory for public innovation". (Excerpt from the brief) The center had to be open to the community, opt for a technological and digital signature at the service of social connection, but also conceive a musical signature as a universal language. But it was also, and perhaps above all, a question of highlighting indigenous cultures by working upstream with the representatives of the community.

The project proposed by architects Chevalier Morales did not satisfy the jury, despite an ambitious approach to eliminate the limits between the programmatic entities. In response to the analysis of the site and the programmatic commission, the designers orient their proposal around three design themes: indeterminacy, hybridization and heterotopia. These design axes result in a proposal that is flexible in its layout and appropriation. The jury recognized that the strong conceptual approach was fully assumed but considered that the "raw" aspect of the layout made it cold and uninviting, and that the proposal did not meet the objectives of the competition. While this rejection was unanimous, the discussion of the other three projects was more divisive.

Atelier Big City + Rayside Labossière's proposal stood out for its strong community identity, assumed through a play of colors, and for its living presence consistent with the conceptual intent. The consortium is humanising the architecture by showing the daily appropriation of the various spaces created in the project. The team textually demonstrates sensitivity to the context of the intervention, but it is difficult to understand the correlation to the proposed layouts due to the graphic style chosen. While the quality of the spaces describes the importance of natural light, it remained difficult to read in the submitted drawings. The jury considered that several objectives of the competition were only partially achieved and that the optimism of the project presented a risk.

In contrast, EVOQ's proposal is pragmatic and rigorous. The project proposes a "signature experience" that applies to the entire walk through the project, from the passage between interior and exterior, wandering between the open spaces. Overall, the jury agreed that the design approach was coherent, appropriate and flexible in its arrangement of community spaces. A few functional deficiencies in the planning of the performance space were highlighted although it did not challenge the overall appreciation of the project.

It is the proposal of the consortium made up of the Architecture 49 and Pelletier De Fontenay that convinced the jury. The formal coherence of the spaces and the use of local materials made the whole "very enveloping and warm" (From the jury report). The consortium chose to emphasize the growing diversity and mixity of the neighborhood by offering various spaces and as many experiences capable of echoing the heterogeneous character of the community and in their own words: "The proposed heterogeneity aims to create the feeling of a democratic, decentralized space, where several expressions can cohabit" (Text Architecture 49 + Pelletier De Fontenay). Emphasis is placed on the public character of the project, keeping with the overall mission of creating a community hub that will provide over 42,000 residents with access to municipal facilities by 2025.

It should be noted that the City of Montreal encountered several challenges at various stages of the project. Negotiations with the construction firm led to a revision of the timeline and a postponement to the center’s grand opening, which was initially scheduled for 2022 but will now take place in 2023. The Inuit community members, after discussions with mayor Valérie Plante, finally accepted the name given to the Sanaaq Center, criticizing however the decisional and participative process of the community: " Makivik and the Avataq Inuit Cultural Institute had sent a letter to mayor Plante accusing her administration of cultural appropriation. The issue: the project to name a municipal project "Sanaaq Centre" without adequate consultation. (Teisceira-Lessard, 2021) The fact remains that the name honors and reinforces a sense of pride for the author's family members: "The family and friends of the late Inuk author Mitiarjuk Nappaaluk are proud and honored to see a new arts center named after the region's most famous novel, Sanaaq." (D. Willette, 2021) Three of the four finalist teams, including the winning team, clearly failed to address the objective of valuing Indigenous cultures in the text accompanying their final proposal. Only the Atelier Big City + Rayside Labossière team acknowledged that the project was to be built on the non-ceded lands of thethe Peter McGill district but this obviously was not enough to convince the jury.

Description
The Peter McGill Centre is part of a large-scale project at the western end of the borough of Ville-Marie in the Peter McGill district, namely the redevelopment of the former Montreal Children's Hospital (MCH) site. The objectives of the project are

•To create an inspiring space that integrates and decompartmentalizes cultural, community and library services by focusing on the synergy of all players and territorial outreach;
•Create a digital culture hub that celebrates sharing, collaboration, networking, participatory governance, digital commons, innovation, democratization and accessibility for all of digital culture;
•Create spaces and facilities that generate an atmosphere that stimulates the visitor to develop a participatory, active and open attitude to the center's proposals;
•Actively support community life by taking care of the residents, especially families, and by valuing the commitment and assets of the community;
•To increase the sense of belonging of citizens and break isolation through a place that is welcoming and encourages the meeting of cultures and generations;
To build a community-led center that contributes to the social inclusion of marginalized people, people with immigrant backgrounds and people with disabilities;
•To facilitate the creative capacities of citizens by encouraging experimentation, lifelong learning and cultural diversity with an emphasis on music and digital arts, civic practices and cultural recreation;
-Contribute to helping neighborhood citizens lead healthy, active lives through improved food security and physical activity;
•To provide leadership in accessibility and sustainability.