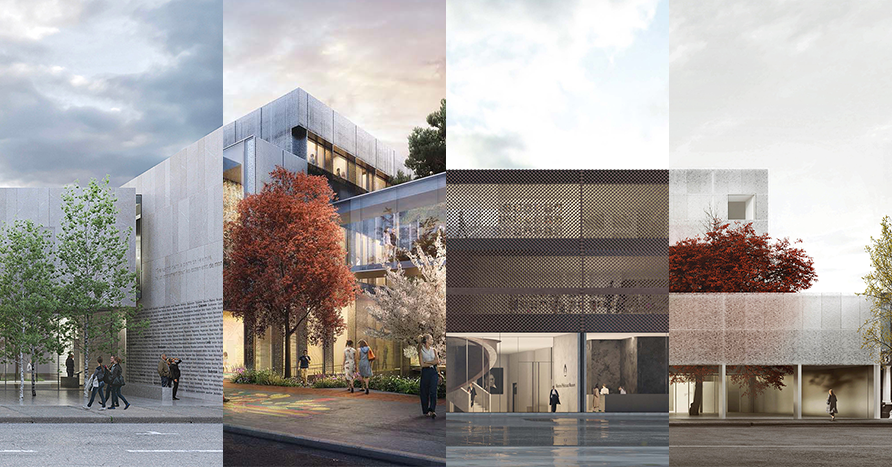 GENERAL INFORMATION ON THE COMPETITION
Editorial
The Montrealness of the Duty of Remembrance
by Jean-Pierre Chupin, published 2022-09-12
Competitions for architectural and urban design projects are always necessary when the problem is complex, undecidable a priori. And what could be more complex than the preservation and transmission of the memory of the Holocaust? This problem was coupled with another, more urban, more contextual, one that some of the 32 teams selected in the first phase sometimes underestimated the level of complexity: this place of memory will have to act, on a daily basis, in the symbolic heart of Montreal, on Saint-Laurent Boulevard, on the "main."

Only a careful comparison of the projects will allow the reader to understand the difficulty of the judgment and the choice that was imposed on the jury. Starting with the vision statement of the Montreal Holocaust Museum, which cannot be paraphrased: "The MHM is committed to fighting all forms of hatred and anti-Semitism, to promoting respect for human rights and human dignity, and to contributing to a more socially responsible and just world... The MHM aims to be a house dedicated to the memory of the victims and survivors of the Holocaust, as well as a place that conveys a message of resilience, solidarity and hope." The challenge was to design a house on Saint-Laurent Boulevard that would be both highly symbolic and appropriately urban. An equation that the winning project by the consortium KPMB Architects + Daoust Lestage Lizotte Stecker handled with "great delicacy," said the jury. A fair remark to which I would add with the hindsight we have that this team has both benefited from the precious advice of Robert Jan Van Pelt on the impossibility of symbolizing the Holocaust by an architectural gesture, and the old lessons of Melvin Charney on the "Montrealness of Montreal."

This two-phase international competition saw 32 teams compete in the first phase and 4 in the second. Always guided or supported by Quebec architects, these teams mobilized some great international figures: from Diller Scofidio + Renfro to Kuehn Malvezzi, from Foster + Partners to Hariri Pontarini, from Office Kersten Geers David Van Severen to Eisenman Architects, from Caruso St John to Alllied Works or from Dorte Mandrup to MVRDV. Although these international teams were well associated with very good Quebec teams, they were not able to convince a jury - operating on anonymous files - that their project met all the expectations, starting with the one aiming to "take advantage of the evocative power of Saint-Laurent Boulevard and to integrate into the neighborhood while affirming its presence.” This led the jury of the winning project to say that "despite a certain sobriety of the façade (the jury) appreciates this very recognizable image and the way in which its framework echoes that of the traditional subdivision of Saint-Laurent Boulevard. This choice anchors the building in its context. The use of Montreal grey stone is a sensitive reference to the material culture of many Montreal institutional buildings.” Of particular note is the three-part sequence of a forecourt, an agora and a commemorative garden, all of which constitute thresholds leading to a space of meditation and contemplation.

Notably and surprisingly, many teams - including the winners - played the landscape card or included a garden. The finalist project by Atelier TAG + l'ŒUF Architectes is both the most outspoken and the most daring in this regard, in its polyglot and social interpretation of Montreal's urban context. However, this social commitment may have overlooked the North American climate, which mercilessly erases the most beautiful vegetation effects during the long winter months. It is also surprising that the symbolic birch forest in the Affleck De la riva + Schwartz Silver Architects' project is an imposing image and that it can be considered by the architects as an "immersive medium.” As these architects aptly note at their expense, one can get lost in the forest.

But one can also get lost in certain architectural conceptions of urban integration. Dubbed "ressouvenance", a literary expression considered obsolete by dictionaries, the project by the consortium Caruso St John architects + Lapointe Magne et Associés reconstructs a façade punctuated by arcade-like openings, which the spokespersons of heritage conservation will unequivocally recognize as inappropriate façadism. The jury expressed "serious reservations about the architectural design...which gives the museum a pastoral image." The same jury was also unconvinced by the strong, neo-cubist, opaque and, let's say it, brutalist form of the project by Eisenman Architects + atelier Apsis, which was received as an intrusion in a historic boulevard. Let's remember that the jury operated anonymously, but some teams may have tried to be recognized by forcing the signature. One thinks here of Atelier Big City's enchanting pastel palette that sends school messages that the jury simply called "colorful architectural language, which does not seem appropriate to the subject matter." Conversely, the very sober, almost too gray project by the Bez + Kock + TBA team worried as much about its muteness as its minimalism. It was not easy to find the right balance between universal meanings and local urban culture. On the side of the international stars, let us note the conceptual coldness of the project of Diller Scofidio + Renfro + Figurr, a group of architects whose dark masses of the "unfinished museum" wanted to lead to the experience of the "abyss" of the Holocaust. The authors rightly point out that St. Laurent Boulevard, as an immigration corridor, was home to thousands of Holocaust survivors after World War II. But the jury was concerned about the impact of this central rift on the regular operation of an urban museum. From the point of view of urban integration, the most surprising project is perhaps that of MVRDV + Kanva, whose street façade is reminiscent of some of the commercial architecture of the 1950s and 1960s, well composed, well designed, with long strips of glass at the bottom accompanied by lights straight out of an Edward Hopper painting. A sort of anti-institutional image that did not win the jury's approval.

Conversely, the project by Pelletier de Fontenay + NEUF architects will be one of the 4 in the second phase with a proposal as simple as it is timeless. But this time it was the reception of certain symbolic choices that were a little too literal, including that of the broken glass in reference to Kristallnacht, which offended some members by its meanings that could be received as simplistic or worse, aesthetic. The clarity of the spatial organization will not be able to compensate for the effect of certain metaphors and material choices that border on a certain cultural elitism. A diametrically opposed reasoning will lead to the rejection of the carefully designed project by Saucier + Perrotte architects in the second phase, with a brick façade playing with translucency and opacities on Saint-Laurent Street, but whose jury will regret the equivalent opacity in the organization of the interior spaces. And always these doubts about the viability of an interior garden open to the sky in winter or, more worryingly, about the truly inclusive character of an access ramp to the roof terrace: the MHM does not flout the ethics of inclusion and accessibility to all human conditions.

In the end, all these small errors of judgment on the part of motivated, experienced and talented architects only illustrate the multiple levels of complexity of a Holocaust Museum in Montreal. Melvin Charney, a Montreal architect if ever there was one, spent many years working on these questions of linking architectural form to its symbolic potential, even to its monumentality in the public space of a given urban culture. It is said that for years he imposed urban design exercises on his students at the Université de Montréal, emphasizing the memorial dimension of what he called the "Montrealness of Montreal." Many did not understand the lessons of the common wall or the perhaps more obscure lessons of small vernacular architecture, banal indeed, but imbued with local quality and culture: the famous lesson of Trois-Rivières. I don't know if he adhered to the idea of a critical regionalism defended by Alexander Tzonis at the same university, as I was not yet teaching there and was not among his students, but I am convinced that this competition put in tension two dimensions that needed to be reconciled and that he would have tried to reconcile: the transhistorical memory of the human drama of the Holocaust and the everyday memory of Montreal's urbanity. Reading the book edited by Louis Martin on the architect of the sculptures of Place Émilie-Gamelin or of the beautiful sculpture garden of the Canadian Centre for Architecture, I dare to bet that Charney would have spoken of this competition in terms of the "montrealness of the duty of remembrance."

"As the leading Canadian museum dedicated to the preservation and transmission of Holocaust remembrance, history and education, the MHM is committed to countering all forms of hate and antisemitism, to promoting respect for human rights and human dignity, and to contributing to a more just and socially responsible world." Montreal Holocaust Museum Vision Statement

The vision aims to establish the guiding principles for the new Montreal Holocaust Museum:

A site of reference
As Canada's leading Holocaust Museum, the MHM endeavours to be a space to develop consciousness of history, encourage citizen action and contribute to a more just and socially responsible world.

A place of remembrance
The MHM aims to be a space dedicated to the memory of the victims and the survivors of the Holocaust and a site for transmitting messages of resilience, solidarity and hope.

A human-centered museum
Rooted in the heart of Montreal and centered on the human experience, the MHM aspires to be a unifying and inclusive space.

A museum in the heart of the City
Drawing on the evocative quality of Saint-Laurent Boulevard, the new Museum aims to be a part of its neighbourhood, while affirming its presence there. It is situated strategically, close to the city's museums and universities, to the Quartier des spectacles and to public transit.

Stage 2.2: Architectural solutions and development in interdisciplinary mode
Submission of proposals: June 1, 2022
Finalists' hearing: June 30, 2022
Jury deliberation and selection of the winner: July 4 to 8
Announcement of the competition results: July 18 to 22