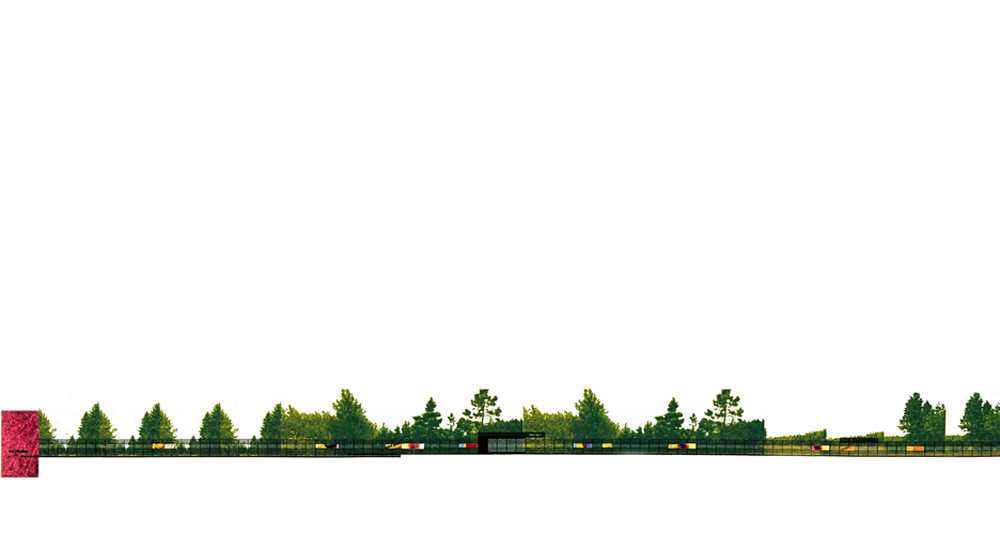 GENERAL INFORMATION ON THE COMPETITION
Description
“The Jardins de Métis is currently working on the preparation of a multi-phase development project that anticipates, among others, the implementation, as of the year 2000, of an international contemporary garden art festival – a unique forum of innovation in landscape architecture.” (From the Call for Candidates, July 1999)

In 1999, an architectural and landscape architectural ideas competition was launched by the Jardins de Métis. Following a public Call for Candidates, three teams of designers were selected from a total of approximately twenty candidates and were invited to participate in a seven-day on-site workshop. This competition was aimed at the global planning of the garden and festival site, as well as the design and production of the site's visitor welcome and service installations.

By means of this contest, a contemporary landscaped garden of the 21st century, equally inspired by the physical and historical characteristics of the Métis site, was to be created. As specified within the programme, the issue was to, “contribute, by the creation of a veritable Park/Landscape, to attributing a strong, coherent, original and significantly rich landscaping identity to the entire site. This new identity should be perceptible from the entrance to the site by the design of its approach, access and the visitor reception zone. It should also contribute in various manners to the overall experience of the visitor.” The basic premises also stipulated the necessity for teams to work with a general unifying concept enabling the transmission of images to future visitors.
Jury comments
List of Competitors
Competition staff and jury
Calendar
Press Review
Articles de presse:
La Presse 05-01-02
Le Soleil 28-06-03
Le Devoir 20-09-03

Revues spécialisées :
ARQ #123, mai 2003
List of general documents
(not accessible)
IMPORTANT NOTICE : Unless otherwise indicated, photographs of buildings and projects are from professional or institutional archives. All reproduction is prohibited unless authorized by the architects, designers, office managers, consortiums or archives centers concerned. The researchers of the Canada Research Chair in Architecture, Competitions and Mediations of Excellence are not held responsible for any omissions or inaccuracies, but appreciate all comments and pertinent information that will permit necessary modifications during future updates.
info@ccc.umontreal.ca
Production