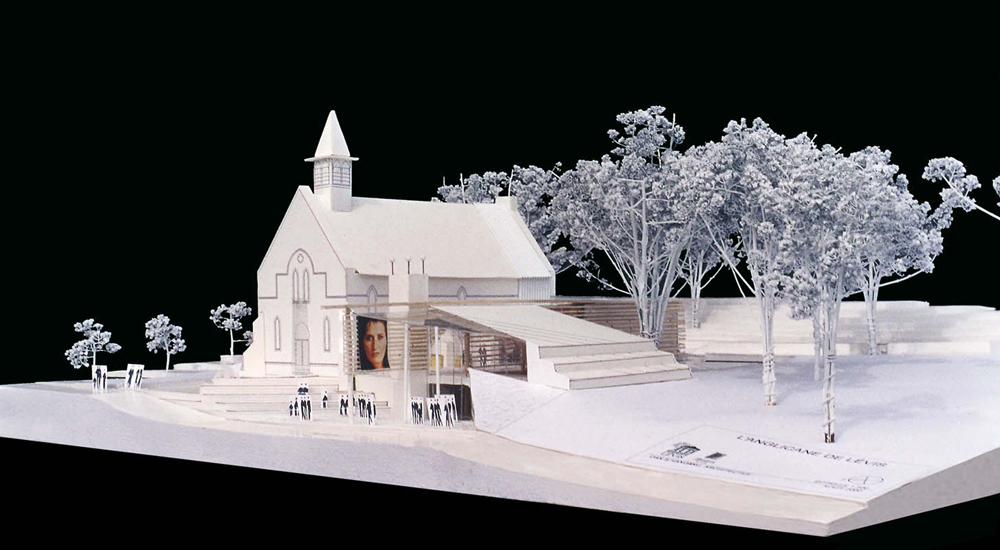 GENERAL INFORMATION ON THE COMPETITION
Description
The reorganization and renovation of the Anglicane de Lévis was part of a development dynamic aimed at the arts and preservation of an important architectural heritage. In Lévis, the cultural vocation attributed to the Anglican Church building over many years, is surety. The Anglican is a former religious temple of worship now used as performing arts and concert hall.

In 1999, the Anglican Church situated in Lévis, near Québec City, was the subject of an architectural competition aimed at upgrading the building to achieve code and standards compliancy. The church had previously been transformed into a 200-seat performing arts hall in 1984, but since then, the requirements of both performing artists and the public, having significantly changed, necessitated a more thorough upgrade. Considering the important heritage values of the building, the urban ensemble and the adjacent park and the renowned acoustics of the church sanctuary, a tripartite committee was formed to direct the building rehabilitation study. This committee was composed of representatives from the City of Lévis, Diffusion culturelle de Lévis as well as the Québec Ministry of Culture and Communications.

The stakes of this competition were doubled because the proposed intervention included an extension to the existing building, while assuring the comprehension and history of the site. The competition's programme equally suggested that, “the planning of a closed exterior court, favourable to the production of shows, cultural and social events, is an appropriate possibility to consider.” Competitors were also to plan a space serving as foyer and cloakroom, improve spaces reserved for the reception of performing artists and technicians (dressing rooms, greenrooms, delivery, etc.), improve the technical infrastructure, all while respecting the building's legacy.

Construction of the winning proposal, that of Dan S. Hanganu, architectes, was completed in autumn of 2003.

ARQ #131, mai 2005
List of general documents
(not accessible)
IMPORTANT NOTICE : Unless otherwise indicated, photographs of buildings and projects are from professional or institutional archives. All reproduction is prohibited unless authorized by the architects, designers, office managers, consortiums or archives centers concerned. The researchers of the Canada Research Chair in Architecture, Competitions and Mediations of Excellence are not held responsible for any omissions or inaccuracies, but appreciate all comments and pertinent information that will permit necessary modifications during future updates.
info@ccc.umontreal.ca
Production