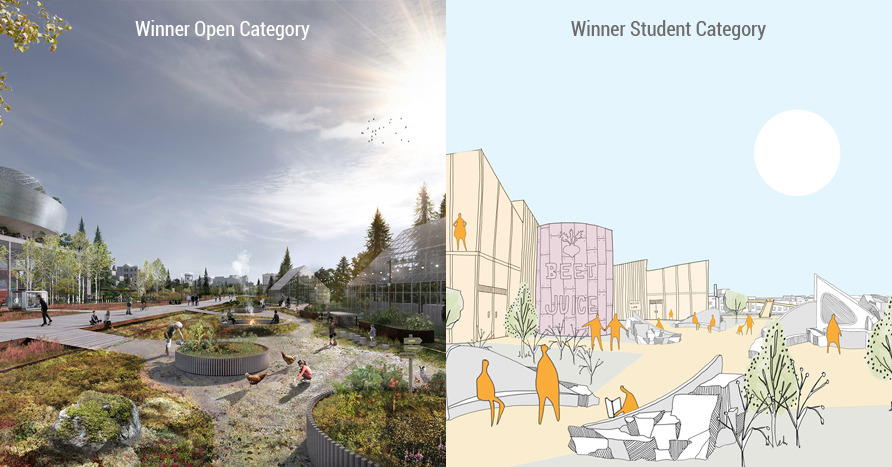 One hundred proposals, presented in a particularly didactic manner, have already made this urban design idea competition a milestone in Canadian thinking on the future of cities in the "Rust Belt". A two-part competition conducted in parallel, since it is both young professionals and students who have sent in their vision of the next thirty years: three decades that no longer need to be presented as crucial for the future of the planet. The mass of documents here is coupled with video material, with each proposal delivering a summary in the form of a short montage. Our editorial offers some personal comments on the didactic value of the selected projects and makes only superficial probes into the 99 proposals. We will publish a supplement as soon as the jury's report has been made public. Given the overall quality and the large number of detailed projects, it is no exaggeration to say that Sudbury is becoming a great laboratory for urban resilience through this competition.

The competition was organized under the auspices of the McEwen School of Architecture, with special support from the McEwen family whose impact on this mining region, affected by the post-industrial crises, is already remarkable. It focused on the future of Greater Sudbury in 2050. As the double image we have chosen to illustrate this competition in the CCC, two-by-two comparison, or pairing, could be the key word for this brainstorm of ideas. It is very rare for an urban design competition to bring together both professionals and students, it is even rarer for competitors to be so well rewarded for their ideas. Our editorial offers some private comments on the didactic value of the selected projects and makes only superficial probes into some proposals. This lab was intended to be didactic in nature, as it was also a communication exercise inviting competitors to translate their visions into a visual language that was as creative as it was accessible. It is also significant that the organizers added a public prize to recognize that a competition is also a platform where multiple voices must be able to express themselves and try to better understand the complexity of urban change. The evaluation of the proposals covered a wide range of aspects:


- Ideas that consider and discuss the general context of the city, while providing more detailed examples of development in the urban area under study;
- Multi-purpose solutions that address and integrate the objectives of the competition;
- Clear avenues for short, medium and long-term actions in each phase/proposed action;
- The expression of ideas in the form of clear and stimulating images to be presented to the public;
- A good strategy for facilitating public participation in the design process.

The winning project in the open section relies on a generic and rather easy metaphor - the sap - whose title does not do justice to the great wealth of heritage, community and landscape proposals it brilliantly illustrates. As with many idea competition projects, it is best not to stop at project titles. The aesthetic filter here is rendered by perfectly understandable visuals, and winks at the hipster version of the "snow bike" set the tone for a triad of principles: reveal, regenerate, unite. The idea of "testing" a new traffic system with the population should inspire urban planning and transportation departments of our Canadian cities, often stuck in their respective thinking silos.

The winner of the student section adopts a schematic visual language that is almost reminiscent of some of the utopias of the 1970s, but is distinguished by its pragmatism. Today's students are no longer those dreamers disconnected from the hippie years, they want to wrestle with reality and, in this case, they propose to "re-stitch" it. The boards are like postcards, very luminous, which adopt what comic book theorists call the "clear line". A kind of retrospective future.

This is followed by a series of projects mentioned, two for each section. The Ma-sh-ki-ki-ke project, inspired by an Atikameksheng word, focuses on wellness and healing: two values that how to build consensus in new theories of the built environment. The watchword of architectural conduct here is benevolence. Its counterpart in the student section uses organic diagrams that echo an organicist interpretation of the urban community. The description of the "systems" activating this organic reading of the city is particularly professional, demonstrating that these students are ready for "real life", contrary to what we sometimes hear about the shortcomings of our teaching programs. The other mention of the open section is based on the very fashionable concept of "adaptive reuse". Here again, we should forget the title of the project "Northern Traction" and look at the particularly detailed visuals, which go far beyond what is usually expected from an idea competition. The second mention of the student section intends to “dream” at the centre of Sudbury's vision for the next thirty years in a large, green, playful territory. If Bernard Tschumi had knowingly avoided using the colour green for his project of a 21st Century Park at La Villette in the 1980s, it is understandable that today, times are no longer in favour of red and black, the two emblems of the pessimistic realism that inspired Stendhal in the 19th century.

But we should not stop at the winners and mentions alone. In the 93 remaining projects, visions and proposals flow in, sometimes from far away, like this project that won the public’s choice award, and which very frankly presents itself as "Bold", "Beautiful" and "Biophilic", demonstrating, in a particularly detailed way, everything that can be done in an urban context such as Sudbury, as seen from Singapore!

Projects have come in from over twenty countries, so we will have to discover them one by one, turn the pages and start looking at a post-covid future for our Canadian cities. The quality of the experts and representatives gathered on a rather big jury suggests intense reflection. Let's wait for the jury's report prepared by Toon Dreesen, whose commitment to promoting architectural quality is beyond doubt.

Jean-Pierre Chupin
IMPORTANT NOTICE : Unless otherwise indicated, photographs of buildings and projects are from professional or institutional archives. All reproduction is prohibited unless authorized by the architects, designers, office managers, consortiums or archives centers concerned. The researchers of the Canada Research Chair in Architecture, Competitions and Mediations of Excellence are not held responsible for any omissions or inaccuracies, but appreciate all comments and pertinent information that will permit necessary modifications during future updates.
info@ccc.umontreal.ca
Production