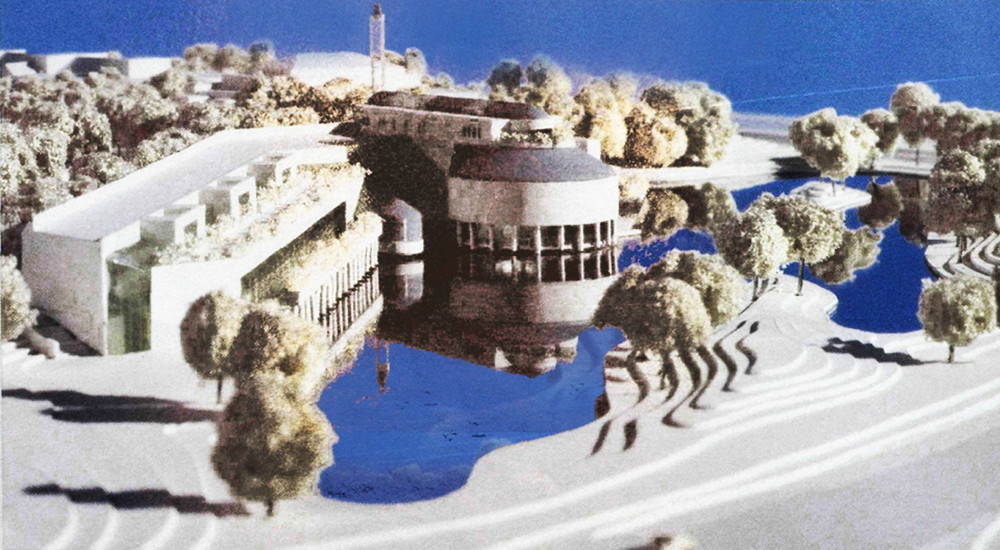 GENERAL INFORMATION ON THE COMPETITION
Description
The new Markham Municipal Building is intended to house activities associated with municipal government and the provision of municipal services.

It is intended that the Markham Municipal Building will become an integral part of the everyday life of its citizens, as well as a place for special Town-wide events. The design of the Municipal Building should accommodate and encourage open and accessible government, promote everyday and incidental public use and support assemblies, receptions, public action and civic ritual. The program included a number of public facilities, which are neither legislative nor administrative, and which should contribute to diverse public use of the building. It is important to provide for a circulation system to promote public penetration into, and use of, the building.

As a symbolic representation of the Town, the Municipal Building should present a coherent and identifiable image.

Because the Town is in the process of growth and change, the question of an appropriate representation of the Town is both particularly important and particularly difficult. It must set the precedent and act as a catalyst for future development in this Town centre, and - at the same time - acknowledge its existing site context.

Finally, Town Council has called for a design which takes account of the dual facts that the Town comprises a series of historic communities, at the same time that it now also houses an important group of contemporary technological industries. It should also accommodate the functions of government with appropriate dignity and public presence.

(CRC text)
Jury comments
The jury felt that the winning scheme had many outstanding qualities, but was particularly impressed with its imaginative site planning strategy, superb landscape composition, and sensitive incorporation of existing buildings. The jury admired the sequences of views created for the passer-by and members of council and staff in their daily work. The scheme's symbolic image was also considered the most appropriate for the Town of Markham.

The jury held certain reservations about the winning scheme, most notably the fact that the detailed development was not as resolved as that of the Myers' scheme, especially in the main public entrance and the council chamber. This, it was felt, could be refined during the design development.

The jury also had praise for the two competitors. It was impressed by the meticulous architectural refinement and sumptuous presentation of Myers' submission. The main reservations about the scheme concerned its siting and the sequences of views it created. It was felt that the Erickson scheme was more successful at sustaining an overall feeling of spaciousness on the site, and that views out of the building were less considered in the Myers' scheme.

The jury was also impressed by the bold drama of Moriyama and Teshima's submission, and admired its simplicity. However, the jurors considered that it was less fully resolved in detail than either of the other two schemes and that it related less successfully to the site's other buildings. In one case, they noted that views of the theatre were completely obscured. There was considerable doubt as to whether the bold symbolic image was the most appropriate for Markham.

As far as costs were concerned, the jury noted the quantity surveyor's conclusion that the base buildings for each of the three submissions were over the base budget allowed. However, the jury was confident that the base buildings were capable of being brought within budget in all three cases. As for the costs of the site work, ancillary architectural features, and landscaping, the jury noted the quantity surveyor's opinion that again all three schemes exceed the budget. It was thought likely that a major portion of these three elements could be phased over an extended period. It was the jury's view that the Erickson scheme was initially capable of achieving more of the overall required image than the other two in the event this phasing occurs.
List of Competitors
Competition staff and jury
Calendar
Competition Documents - Wednesday July 23, 1986
Question period Begins - Wednesday July 23, 1986
Question Period Closes - Wednesday August 13, 1986
Answers sent by Courier to competitors - Monday August 18, 1986
Competition Closes - Wednesday September 3, 1986
Meeting of Jury - Friday September 5, 1986
Recommendation of Winning Scheme to Council - Tuesday September 9, 1986
Notification to Winner - Wednesday September 10, 1986

The Architect, juillet 2009. "Working with Arthur Erickson" (http://www.ktpmalta.com/publications/ta/tA049.pdf)
List of general documents
(not accessible)
IMPORTANT NOTICE : Unless otherwise indicated, photographs of buildings and projects are from professional or institutional archives. All reproduction is prohibited unless authorized by the architects, designers, office managers, consortiums or archives centers concerned. The researchers of the Canada Research Chair in Architecture, Competitions and Mediations of Excellence are not held responsible for any omissions or inaccuracies, but appreciate all comments and pertinent information that will permit necessary modifications during future updates.
info@ccc.umontreal.ca
Production