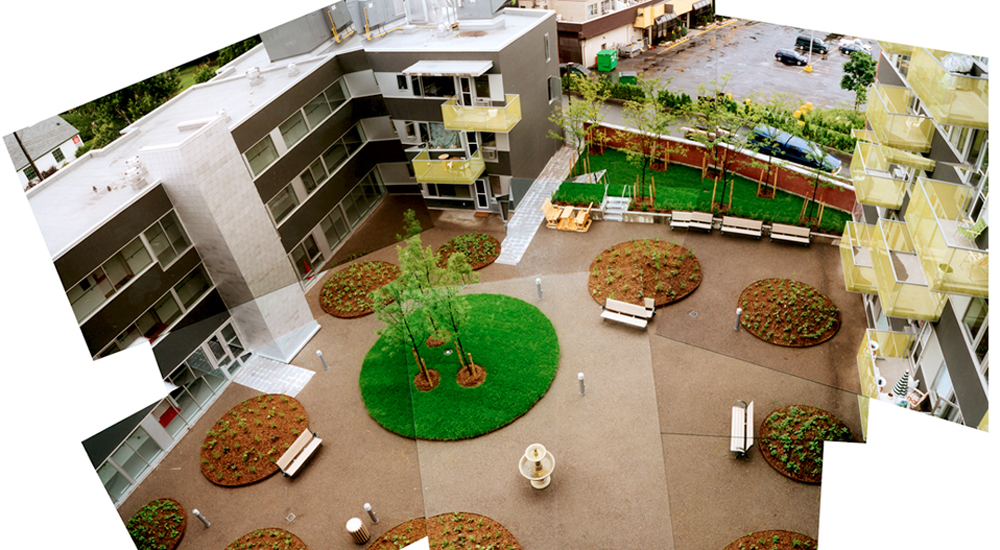 GENERAL INFORMATION ON THE COMPETITION
Editorial
Benny Farm : managing complexity
by Jacques Lachapelle , published 2007-05-01
Destined to accommodate veterans, Benny farm has recently avoided demolition in order to become, for one, a sustainable development project internationally recognised thanks to the Holcim Foundation award presented to l'ŒUF.

Such a journey did not happen without rough patches. It comprises several stages with one of them resembling a competition: the definition of the master plan. It is questionable whether or not it is really a competition. Like a conventional ideas competition, four agencies did present master plans. But there was no jury per say. Previously, a Task Force formed of residents of Benny Farm as well as the neighbourhood, elaborated objectives. The architects were present during those meetings. The submitted projects were discussed by the Task Force and presented to the public for comments. The firm Saïa, Barbarese, Topouzanov Architectes was appointed by the CLC, principal developer, but their master plan continuously evolved and part of its completion was allotted to l'OEUF.

In view of all the uncertainties known by the project, a competition became a way of channelling ideas and making them progress. In comparison with the typical competition aiming at an original solution, what becomes of the purpose of a competition in an open planning and participative process? In this situation, the competition reveals itself to be a means of a closer monitoring of the process. There is no place here for authoritarianism to the benefit of attentive listening. Considering the energies needed, such a competition seems only to justify itself in cases of great social complexities where contributors are more than simple consumers but full users and citizens.

Be that as it may, Benny farm can certainly be placed in Montreal's great experiences on social projects, like Milton Park for instance. But on another level, it raises the question of social housing in contemporary architecture as well as the relevance of competition in regards to this issue. With this consideration, the L.E.A.P. gets involved via the competition launched by Anne Cormier approaching the students of the Canadian architecture schools for which the second part will start this summer.
Description
A master plan competition amidst a participative approach

The genesis of the re-development project of Benny Farm: the controversies

The construction of the rent controlled dwellings of Benny Farm dates back to the years 1946-1947. The conception of the master plan was appointed to the architect Harold James Doran. Eloquent incarnation of modern thoughts on social housing, the buildings are established in an isolated way amidst a landscaped site. In 1947, the Canada Mortgage and Housing Corporation (CMHC) becomes owner of the setting and hands out the dwellings giving priority to veterans. A strong community spirit developed itself in the following decades which proved itself strong if we consider the appropriation of Benny Farm by the veterans' families.

In 1991, the CMHC announced its intention of re-organising the site. It hired the architecture firm Gauthier, Guité, Daoust to conceive a master plan. The demolition of the existing buildings was planned in order to transfer the land to independent promoters for an important densification of the site (1200 dwellings against the original 384). Aging veterans were to be relocated in new buildings erected on a portion of the site kept by the CMHC.

Several aspects of the project arouse controversy: the strong density suggested for the site, the importance of this corpus for the modern architectural heritage, the demolition of the existing buildings from a sustainable development point of view, et c … Amidst all these preoccupations, the one that arouses the most controversy is the loss of the social calling of the site. Building so many private dwellings could endanger the balance of the Notre-Dame de Grâce community.

In partnership with the Office d'Éclectisme Urbain Fonctionel (l'Oeuf), community organizations protest by proposing a counter-project where 100% of the existing buildings are kept. At the same time, the CMHC project is rejected by the City of Montreal. In the following years (1992 – 2001), several redevelopment projects and counter-projects will succeed each other – the first ones basically planned to keep one third of the existing buildings and the demolition of the rest, the second ones, conversely, conserving everything. It is within this controversial aura that the firm Gauthier Guité Daoust, architectes realises nonetheless Phase I, between 1995 and 1997.

The Canada Lands Company (CLC) becomes owner of the Benny Farm site in 1999. It then proceeds to the building of Phases II and III, following another master plan proposed by the firm Saïa Barbarese (today Saïa Barbarese Topouzanov Architectes).

After these unsuccessful attempts to install a project for a master plan that would make a consensus between the members of the community and the owner, the CLC decided tot act as principal developer on the project and therefore define a new master plan for the site.

It is in this state of mind that the CLC proposes in 2002 a participatory process for the elaboration of the master plan. The objective is to respond in the best way possible to the expectations and preoccupations of the community. In order to elaborate this approach, the CLC called upon an external organisation : Centre d'intervention pour la revitalisation des quartiers (CIRQ), today known as Conversité.

In order to coordinate the process, a Task Force comprised of 10 members implicated with Benny Farm and the community, voicing various points of views, acted as consultant for the CLC. Its main responsibility is to take into consideration the preoccupations of the community and express them. That way, the public opinion is channelled amidst the new process.

The first mandate of the group is to establish a consensus on the objectives for the site redevelopment. The conclusions of this reflection will serve as the basis of the elaboration of four design alternatives realised by as many architectural firms. To the exception of the Braq -In Situ consortium, the three other firms had already been involved with Benny Farm: Daoust – Lestage (previously Gauthier, Guité, Daoust, architectes), Saïa Barbarese Topouzanov Architectes and l'OEUF. The second mandate of the Task Force is a double one: evaluate the design alternatives submitted in light of the public feedback and then make the proper recommendations to the CLC as to what type of principles should be integrated to the master plan.

In order to establish the master plan, the architectural firms participated as observers to the Task Force meetings that led to the consensus on the redevelopment objectives. On those bases, each firm realised a design alternative for the master plan that served the debates among the Task Force and the community. It constituted a reflection basis from which the Task Force could formulate its recommendations for the design of a future master plan.

Consequently, the CLC finally decided as owner and principal developer, to retain the services of a consortium formed by the firms Saïa Barbarese Topuzanov architectes and Claude Cormier architecte paysagiste inc for the design of the master plan.

Furthermore, it is within the scope of the revised master plan that the CLC has appointed l'OEUF for the completion of four social housing projects to be built on the redeveloped site. The architectural expertise of this Montreal firm in sustainable development has strongly influenced the achievement of the 2002 master plan. On top of the sustainable renovation of the 1947 buildings, l'OEUF created a new ecologic community management system for Benny Farm (Verdir l'infrastructure à Benny Farm project).

The Holcim Foundation for Sustainable Construction (“Holcim Foundation”) has presented l'OEUF in 2006 with one of its prestigious awards, recognising the implication of the team in the redevelopment project for Benny Farm since 1992, but most of all the technological advancement set in the social housing projects built since 2002.
Jury comments
List of Competitors
Competition staff and jury
Calendar
(click French version to see the schedule)
Press Review
Articles de presse :