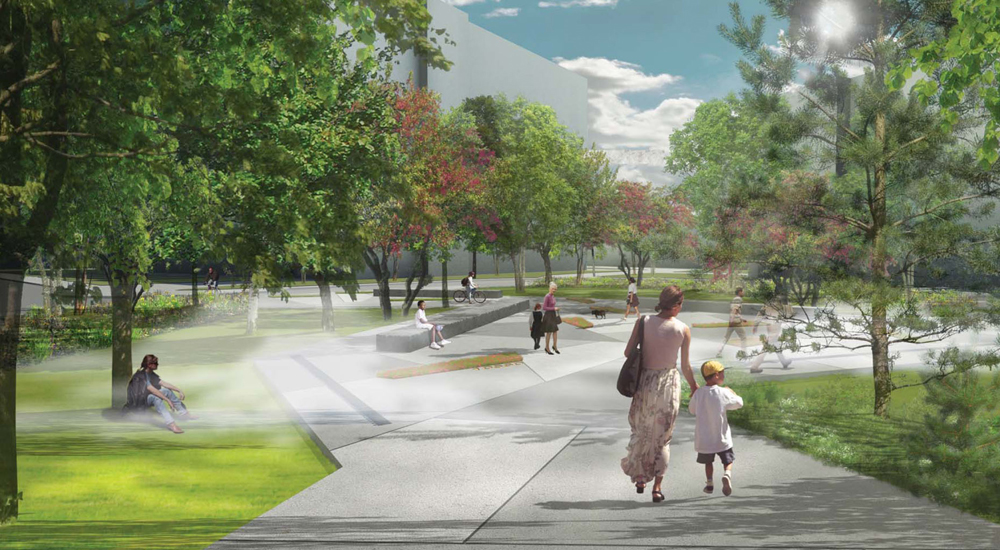 GENERAL INFORMATION ON THE COMPETITION
Editorial
Fresh firms, opacity of the judgment
by Konstantina Theodosopoulos, published 2013-02-22
As a metropolis, Montréal offers very little undeveloped land. The planning of a new public park represents a unique opportunity for landscape architecture firms to address issues such as counteracting heat islands, meeting places, or even circulation strategies, as well as redefine the notion of contemporary green space. For future designers and students alike, every competition becomes a learning experience, one that should be educational and transparent.

Three landscape architecture firms were selected for the Place de l'Acadie Landscape Architecture Competition (launched in 2010 by the Ahuntsic-Cartierville borough) which raised the question of the planning of urban green spaces: NIPpaysage, the Version Paysage + Vlan paysages consortium and Groupe Rousseau Lefebvre. The competition brief stated the objective of creating a new “fresh public space” which would contribute to reduce heat islands. The challenge was the planning of a site of approximately 3200 square meters located southwest of the intersection of de l'Acadie and Henri-Bourassa boulevards, near several parks, arenas and residential developments. The competition is part of a broader context of the redevelopment of place de l'Acadie and place Henri-Bourassa, which includes the demolition and reconstruction of substandard housing.

The three competing teams, with diverging visions, developed three surprisingly different proposals. NIPpaysage's winning project defined the park by a radial circulation leading to a central public square. Version + Vlan Paysage's proposal presented a linear circulation through the park, whereas Groupe Rousseau Lefebvre presented a closed loop circulation centered around water, a fundamental part of Acadia's history. The circular and fluid circulation emphasizes the presence of water on the site, primarily as a cooling element. On the contrary, Version + Vlan Paysage' linear circulation through the site, called “landscape bar” extends past the limits of the site to affect the urban scale.

As was previously mentioned, NIPpaysage's winning proposal relies on a radial circulation leading to a focal meeting point. Entitled “Mosaics”, it is in fact a “sound-proof island”, or, an area protected from the noise of the adjacent boulevards by the planning of mounds on the periphery of the park. The project offers a variety of experiences to future users, including the planting of a diverse vegetation and the integration of a handful of elements such as a slide inserted into a slope, a winter skating rink, misters timed to a light show in the summer, a rock climbing area, a playground for children, gardened spaces, stone benches and an amphitheater. Many elements reference the history of the borough, and the presentation boards show a particularly interesting design process. The jury report states that the project stands out with regards to the competition rules by “the variety, the quality and the coherence of the proposed areas, the intelligence of the response of the concept in relation to the context, the potential freshness producing performance, the sensitivity towards ambiances as a result of the humanist approach of the concept, the subtle and evocative quality of the commemorative elements, the conviviality of the meeting spaces, the technical feasibility and the livableness of the concept with regard to its adaptability to subsequent phases.”(from the jury report)

However, the succinct official document entitled “jury report” (French version available on the competition's site http://mtlunescodesign.com/fr/projet/Concours-darchitecture-de-paysage-Place-de-lAcadie-LAUREAT) limits itself to revealing the qualities of the winning project, it offers no comment on the strengths and weaknesses of the two other projects. Thus, it is not a report but merely a statement of the outcome, and it is up to the CCC readers to form their own opinion. As a bachelor's student in architecture with a growing interest in design competitions, I am compelled to note that the competition organizers have left us a mystery. Therefore, because future architects and landscape architects are reduced to speculation and cannot learn from a barely transparent judgment, we must ask our own questions:

- Are three answers to a specific question sufficient in order to fully discuss the issue on hand?
- Does the selection of three competitors based on previous work contribute or diminish the relevance of the principle of judgment by competition?
- What were the strengths and weaknesses of the two other projects submitted for the competition?


The Borough of Ahuntsic-Cartierville is holding a landscape architecture competition as part of the design plan for the neighbourhood park included in the Place de l'Acadie residential redevelopment initiative.

The project calls for the greening of the Place de l'Acadie site. Landscaping of this new park will help combat the urban heat island effect, through such methods as the creation of areas to refresh the surrounding air as well as shaded zones, and increasing the density of vegetation.

The forecast budget for the overall project is $1 million, and the total surface area to be redeveloped is 3152 square metres.

Ahuntsic-Cartierville Borough Mayor Pierre Gagnier said: "This competition presents an opportunity for the province's landscape architects to put their talents to work developing a green space that will result in enhanced quality of life for both current and future residents of Place de l'Acadie."

Mr. Gagnier added: "This public space will be at the heart of the project to redevelop Place de l'Acadie and Place Henri-Bourassa, a major initiative that includes the demolition of 550 substandard dwellings and reconstruction of 1,293 new units, including 468 condominium units, 602 privately leased units for seniors, as well as 223 social and community housing units."

(from the competition's documents)