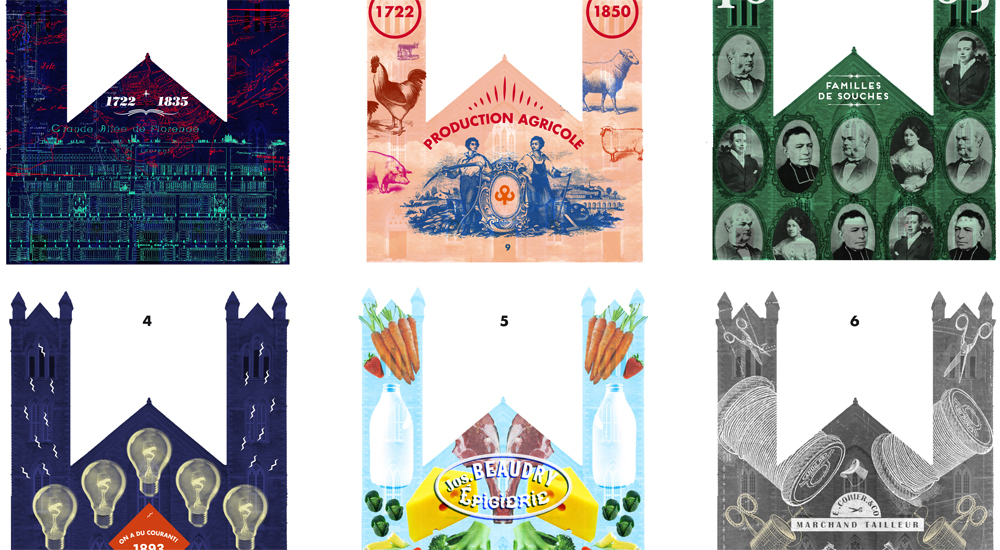 GENERAL INFORMATION ON THE COMPETITION
Editorial
Urban and Angelic Projection
by Mandana Bafghinia, published 2018-10-24
In recent years, new technologies of representation have changed the way we experience the city. Instead of creating a canvas or sculpture to create the illusion of other objects, rather than painting the illusion of light when it falls on the surface of objects, the projection forces us to look at the light in itself. In contemporary art, the creation of illusion passes from traditional supports to that of an object in which light is the first vector, creating ambiguities of perception. The question posed by this idea competition is to recognize if these new modalities of projection increases or even sublimates the object of architecture or, on the contrary, if it weakens it.

In 2013, in the new wave of “Saint-Laurent en mouvement”—a program of the city of Montreal as part of the 2007–2017 action plan—the borough of Saint-Laurent launched a competition to design a video projection on the facade of the Saint-Laurent church. The focus was on history and heritage, particularly that of old Saint-Laurent, and “promoting excellence in architecture and design.” In addition, an emphasis was placed on promoting the cultural and historical aesthetic value of Montreal through new media. Open to all disciplines, this anonymous two-phase competition generated only seven proposals. The jury included two professionals in environmental design and art direction. Three finalist teams were invited to transform the facade of the Saint-Laurent church: Ouellet + Laferrière, Favier + Noirbent, and Dufresne + Proulx Bouffard + Gareau + LeMoyne. At first glance, the Ouellet + Laferrière proposal is a composition based on the notion of symmetry which, it seems, adjusts its concept to the original shape of the building. Favier + Noirbent’s proposal was based on the concept of collage and the third team on photography. A quick review of the jury report reveals the constant dissatisfaction of the jury through every phase. At the end of the report, the jury advocates the help of a scenographer to improve the overall narrative form. The examination of the proposals, however, reveals innovative and different strategies that raises the question of perception today.

On an architectural level, following the reading of the jury’s comments, it appears that Ouellet + Laferrière, two graduates from UQAM’s graphic design program, managed to show the most coherence with the facade of the church. Yet, on the presentation board and the video, the visual “parade” did not showcase the architectural aspect of the church. On a narrative level, the proposal is based on a historical evolution of the city. In the project description, what attracts attention is technical wording, is the method through which these images are presented such as a kaleidoscope or the technique of stop motion. What distinguished the winning team was the play on typography which related to the temporal aspect, years and keywords that helped understand the projected images. Since the common thread between projections was deemed too weak following the presentation of the project, the name “Éclaireurs” was changed to “Historiscope” and many elements and forms were added to the primary concepts.

With the second finalist team, Favier + Noirbent, the narration unfolds at each historical landmark, with colorful and iconic pop-ups against a gray background. Rather than typographic animations, the team favors the auditory aspect. A character tells a story in an enigmatic tone, a story that accompanies visitors in a sort of journey. The appearance of folding paper, the church seeming to unfold in space, caught the jury’s attention. Their comments indicated their keen interest in this team since the first phase. However, similar to the winning team, the link between each projected frame is unclear. The only aspect that apparently did not convince the jury was the lack of true development of the project during the second phase, which makes judging of an ideas competition an abstract affair.

The third team’s proposal, Dufresne + Proulx Bouffard + Gareau + LeMoyne, used a yellowish and blue color palette, with authentic images—negative photographs with chrome colors. In the background, the colors return to the base palette, while in the middle ground, a game is created between the complementary colors. The realism of the images helps the citizens and visitors better appropriate what they perceive. The jury found the project too “generic” and even too “corporate.”

In the past, churches aimed—by their presence—to provide the sensation of the sublime to their citizens, with a powerful facade—decorated with sculptures or large masonry—and material mass of their towers guiding the onlooker towards an immaterial interior. Inside, a light—filtered and colored by stained-glass windows—descended from the sky to reveal the divine presence. The Saint-Laurent church of Montreal, designed in 1835–1837 in a neo-Gothic style, differing from the medieval language, aimed at reviving the architectural foundations of the Gothic style: to work an image, to create and to arouse a new perception, in short a neo-picturesque. Today, the observer remains frozen in front of the screen surface of a fantasy, trapped by a perceptive illusion that robs the monument of its three-dimensional aesthetic.

The visual perception of an environment is no longer determined solely by the dialectic of fill and void, and the mere presence/absence of matter, because this definition of space does not consider the relation between a subject/observer and the object of perception. A more psychological consideration of the nature of space is emerging. The term “projection,” from the Latin projectio, means “to throw onward.” It denotes the displacement of an element from one space to another, by an operation carrying a shape—or certain elements of this form—on a real support, a receiver that accommodates this element.

Uncertain between those who developed the project for the second phase, the jury’s decision was not clear between teams Ouellet + Laferrière and Favier + Noirbent. In an idea competition, is it not the originality and the radicalness of the concepts that should come to the fore? The mobilization of a new medium for the representation of a monument should offer another appropriation of the built space. The proposals would make it possible to no longer inscribe the gaze in a fixed contemplative device, but instead in a movement, in a manner comparable to the projections and images of the contemporary city, which constantly moves and changes before our eyes. By inversely echoing Lotte Eisner’s memorable book The demonic screen, we can also wonder if the good intentions of the organizers and competitors ultimately lead to a kind of angelic urbanism, in which the magic of images replace actual monument on the public space.