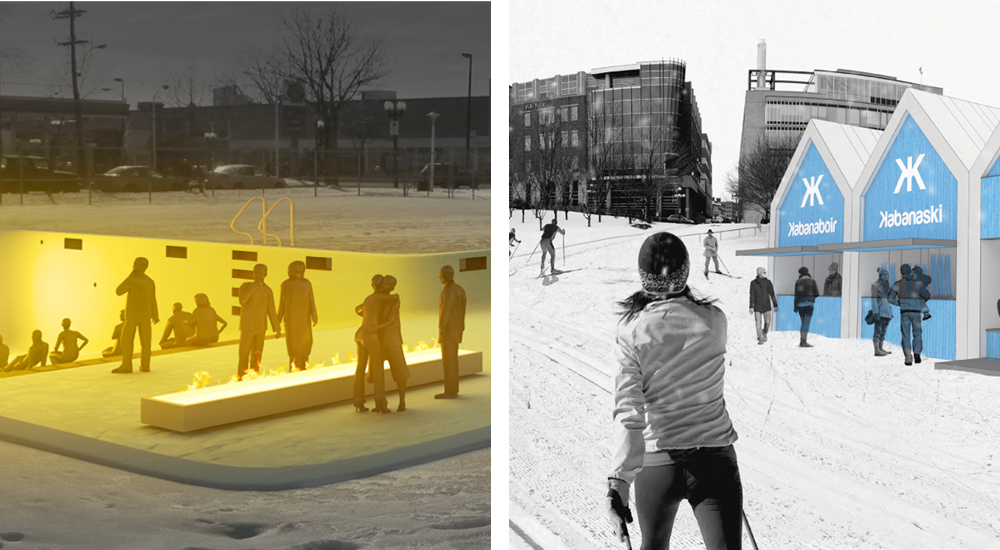 GENERAL INFORMATION ON THE COMPETITION
Editorial
Nordicité: Ideas for a Genuine Problem
by Antony Gasnier, Moumtaz Kaoukji, published 2016-11-30
Held in Montreal in 2013, the idea competition “Nordicité” provoked a conversation on new urban facilities and public spaces adapted to winter conditions to “celebrate how winter affects our daily lives.” This international competition hosted 24 professional teams and 12 student teams, each involved in the field of development and design; the winner was offered a cash prize and broadcast media (websites, social media). The question was: How can architects and designers rethink the urban environment to improve the winter experience in our everyday life?

Canada is one of few countries with temperatures that reach -40 degrees. To remind Canadians that they are included in this selective list, the Association du design urbain du Québec, the Bureau du design de la ville de Montréal and Vivre en Ville launched the competition “Nordicité”. These organisms intended to create an environment conducive to creativity as to receive original and intelligent proposals that “encourage participatory action” from the occupants. Spaces that were sought out encouraged wandering and strolling, revitalizing the city’s outdoor spaces, thereupon increasing the range with which they are inhabited. Of the 61 registered teams, only 24 student and 12 professional teams submitted a proposal in 2013.

Awards were divided into two categories; $1,000 for professionals and $500 for students. Additionally, a public opinion prize was awarded, consisting of a $150 voucher towards the catalogue CODE, as well as Vivre en Ville Choice, offering nothing other than their own publication.

Despite the international opening of the competition, the majority of the participants came from Montreal with a few exceptions from Quebec City. Taking a closer look, a general trend emerged, which was to provide winter shelters. This trend goes against the initial order that aimed to celebrate winter, not hide from it.

Furthermore, jury comments revealed three overarching themes; distinguished as “the modes of transport, an artistic oriented intervention, or specifically winter destinations. […] The spatial opportunities when winter is contrasted with summer, came up in multiple proposals. Finally, the question of feasibility of the proposals was brought to light, in spite of it being an idea competition.”

With regards to transportation, only the professional category made suggestions, some proposing new modalities, such as a cross-country skiing trail through out Montreal.

Many others took a risk with an “artistic installation”. The unique (non-winning) installation Délaissé Hivernal, by students Audrey-Maude Gosemick, Marie-Renée Vial, Camille Lepage-Mandeville-Nicolas and Matthew Devito, presented a colourful woven project. This installation extended through the trees of Montreal “to restore colour and warmth” to the parks and streets that are deserted in winter. As for the professionals, one team proposed a metal mesh, anchored to the blind facades that collects fallen snow to make abstract tableaux, evoking winter landscapes. For each new snow, this mesh can be modulated by passers, creating new patterns. This proposal, named Le bal des neiges by Annie Breton and Frédérick Boily, is a nice reminder of winter’s playful nature.

Returning to the subject of the dichotomous winter and summer, the student team consisting of Clementine Hederer Maya Gana and Nancy Dubeau, suggested installing multiple larger scale components between Prince Arthur Street and the Saint-Louis square. Titled La station chalet, these dispersed urban cabins, made of ice and wood, can adapt in the summer to become terraces, hosting shopping and sports (such as curling and snow park). In the same vein, a professional team composed of Olivier Legault and Raphael Thibodeau, proposed to install ephemeral spaces in parks with which communities can play sports and have social gatherings. Named Montréal hivernal, these spaces encourage citizens to use their park as a canvas and to inspire winter activities, thus creating a lively environment and friendly rivalries between neighborhoods. All this in order to enjoy the winter!

Often observed in idea competitions, the jury opted for inclusion; two teams tied for first split the prize and an honourable mention was given for each category. This makes a total of six winners out of 36 participants, hence 17% of the entire proposals.

Many projects were picked as “winners”, such as a professional team composed of Francis Falardeau-Laperle and Janie Hemond, proposing a project called Korridor nordik. This project attracted the attention of the jury because it was “ambitious, almost radical, implanted in the centre of the city [side].” This project, in the modes of transportation category, proposed to convert Montreal’s bicycle routes to a cross-country skiing network in the winter. Even though this proposal was categorized as a recurring utopia, the jury wanted to advert the iconic character of this Nordic transportation mode, which would have “a real impact on the daily lives of Quebecers.” Similarly, the students Mikael Saint-Pierre, Audrey Girard and Eadeh Attarzadeh presented Attention ça glisse, an installation comprised of a series of slides spread over the southern slope of Mount Royal, suggesting playful topography. The downside, however, was observed in the materiality of the project. The jury noted that the slides could have been “made of ice and snow, expressing a greater sense of Quebec’s Hivernité.”

To come back to the subject of extreme contrasts between Canada’s winters and summers, one of the winning teams in the student category, with a proposal called Hivernité, presented a snow storage system in public spaces in order to use them once the summer comes. A process that will ensure, according to Manon Otto, a cold water supply once the snow melts by a drainage system. This public space can be used just as much during the winter as the summer. Additionally providing a sustainable system that is considerate of environmental issues, this project was recognized for its intelligence and pertinence. In the professional category, Backwash by Jean-Daniel Mercier and Alexandre Guilbeault, also distinguished itself for its seasonal adaptation. This project intends on shifting the qualities of gathering observed at public swimming pools during the summer, to the winter. Once drained, the pools could be conducive to community activities, such as film projections, campfires and conversation. The pools are deeper than ground level and could possibly create a microclimate that could keep occupants warm.

With regards to the Vivre en Ville mention, the jury opted for approaches that allowed passers to enjoy the winter with participatory qualities as well as artistic qualities. The student proposal by Jean-Philippe Simard, Alexandre Hamlyn, Emilie Gagne-Loranger and Julien Beauchamp called Opération déneigement, creates an environment “[…] spared from snow removal operations […]”. Doing so through an installation comprised of yellow markers that generate spaces that grow an appreciation for winter, for its barren landscapes, playfulness, and for its capacity to attract crowds.” Some members of the jury even proposed to permanently install the project. Then again, this attempt was criticized for its relevance to the improvement of the […] every day winter experience.” The professional proposal named Lieux dormants was unanimously appreciated by the jury for its poetry. Serina Tarkhanian suggests freezing plants while they are flowering, and to dispose of them in the public square during the winter. By doing so, evoking the memory of past seasons, juxtaposing the sensitivity and quality of nature with the passing of time. According to the jury, this project “[…] provides a nice place for art in the city.” Time reveals the evolutionary nature of her work, the melting ice will highlight the qualities “[…] focused on the senses, such as smell and touch.”

For a competition that was so accessible, only three projects, being Lieux dormants, Hivernité and Korridor nordik, addressed the actual reclaiming of urban environment to experience winter in everyday life. Beyond the results, and considering the needs, we can question the propensity for contemporary ideas competitions to propose genuine problems that should otherwise generate real projects.

The location, within the province of Quebec, is at the discretion of the participants , but it must be real and clearly identified. You're invited to choose "common" places, used by the people on a daily basis rather than the places already invested by existing events. The propositions can range from pinpoint interventions to larger scale ideas, with everything in between. In brief, there is no definite goal to the projects other than to help the urban environment emulate the everyday winter city life and experience it in new and unconventional ways.

(Program excerpt)
Press Review
Concours Nordicité, 2013, Kollectif
Concours Nordicité : le palmarès, 2013, Le Courrier de l'Architecte
List of general documents
(not accessible)
IMPORTANT NOTICE : Unless otherwise indicated, photographs of buildings and projects are from professional or institutional archives. All reproduction is prohibited unless authorized by the architects, designers, office managers, consortiums or archives centers concerned. The researchers of the Canada Research Chair in Architecture, Competitions and Mediations of Excellence are not held responsible for any omissions or inaccuracies, but appreciate all comments and pertinent information that will permit necessary modifications during future updates.
info@ccc.umontreal.ca
Production