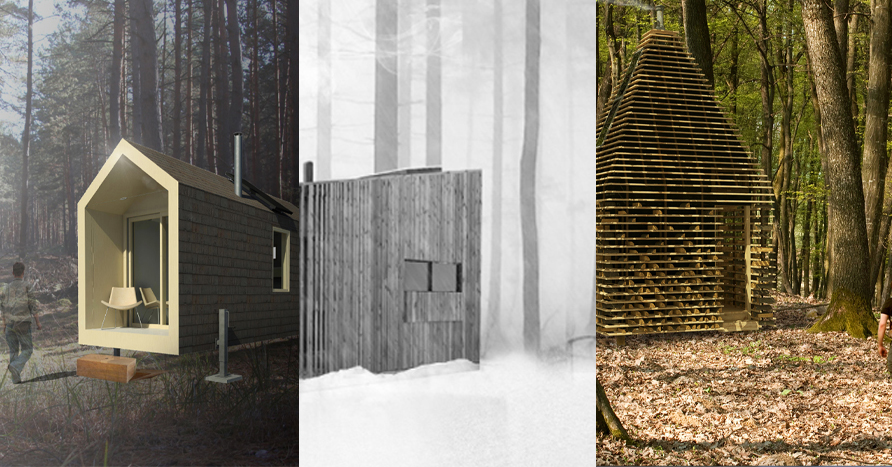 From the folklore of the small Canadian house to the concept of the ideal global cabin, 57 variations were designed for a rare competition in New Brunswick. Launched in early 2014 by Community Forests International (CFI), the contest Blur the lines - Cabin Design Challenge, was globally open to all architects, artists, nature enthusiasts and DIYers to discuss the subject of the ideal cabin. The site was the only constraint, situated on 235 hectares of forest site on the edge of Sussex, New Brunswick. This contest was the first step for CFI in establishing a rural innovation campus. In short, fifty-seven international entrants answered this contest in one round, submitting their ideal of a cabin of seventeen square meters in the woods.

Is the hut primarily a shelter, by definition intrinsic within the surrounding environment, or is it more a formal object for which quality is recognised from its design? Through its insertion in the forest, how does the cabin become the link between the human and the nature? Finally, how may we tangibly transcribe these parameters in order to make a realistic and achievable project while streamlining costs?

The projects that were not picked for the final selection redundantly expressed the following themes: osmosis with nature, technical ingenuity, ancestral precepts, rationality, etc. The participants who dedicated themselves to the guidelines mentioned above, while being clear, also had a tendency to forego other equally important elements. The proposal from Alessandro Cascone & Luca Preziosa, for example, focused on the forest’s composition and the ensued senses invoked. The result was a seemingly complex multi-stage structure for which constructive aspects were less developed. Conversely, the "Wrap it Up" project from Kyle Reckling & Kevin Jele was a model of rationality, proposing detailed diagrams and a careful budget. The cabin was developed according to existing dimensions of materials, disappointingly recalling a prefab cabin kit. While the project was almost ready to build, it felt like it could be implanted anywhere, making a project for which, in the end, we learn little in regards to the cabin’s relationship to the forest. The same remarks also applied to "Helios Cabin" by Nizar Neruda for which the context was completely absent, even in graphical representations. Some projects, such as the spheres by Jean C.I. Wang, seemed happily located, consistent with the forest background, but not with the harsh winters and the geographical context.

The project designed by Kyle Schumann & Katie MacDonald received a special mention because of its unique ability to innovate from a simple and basic need: the storage of firewood. The design procedure of the hut was based on the interpretation of a concrete need, giving the cabin the uncanny aesthetic of a large pile of wood. Here, the need and the use contributed in defining the form.

"Acadian Abstraction" by Belle Stone & Jeffrey Sullivan won the second prize. This project was distinguished by the care taken by the designers in its relation to the site. Interactions and visual links between the occupant and the environment were highlighted with a large patio with an open view to the front and "fragmented" on the sides. This feeling of peripheral inclusion grows vertically, framing the sky and the canopy with two openings. As noted by the jury, the project makes “sleeping out under the stars possible in any weather, any time of year; you get to enjoy nature without giving up all your creature comforts!"

The winning project, "The Whaelghinbran Cabin" by Nathan Fisher, was the only one, in the eyes of the jury, for which the concept of the cabin genuinely harmonised within the local context. The forest was treated as an indispensable partner, with whom all interactions were respectful. The cabin, a model of rationality and constructive efficiency, as demonstrated by details and estimate costs, imbeds itself with a minimal footprint. Indeed, the ground contact was reduced to four points of support - designed using caravan racks - thereby not distressing the forest floor. This system also contributed to a nomadic aesthetic, recalling Eastern Canadian wigwams; without needing disassembly, the construction could be moved on a sled or trailer by animal power, allowing the site to regenerate between periods of use punctuated by seasons. This reinterpretation of an ancestral aboriginal custom is made through constructive modern thinking, for which, according to the jury, proposes solutions in adequacies with the ambitions of the organism Community Forest International (CFI).
Large glazed openings on the four sides of the cabin, a large bay window, invite the user south. This is one of the few projects offering the option of a beautiful indoor-outdoor transition, enhanced by the presence of a real outdoor space that was designed for use and not only as transient. The cabin offers a standard configuration without eccentricity which, in the end, won over the jury.

By the attractiveness of the fascinating cabin theme and the openness to the international, the competition gathered an impressively varied and interesting collection of proposals. It remains that many competitors seem to have been very oriented towards the development of the hut as an object, realizing a form of fantasy combining childhood memories and compositional freedom. The result often takes the form of a dropped item in context, without any real dialogue with the forest context.

In conclusion, it is important to highlight the fact that the jury could not stand to prevent a critical regionalism in rethinking the theme of the generic cabin. The jury’s final words, on the subject of the winners, explicitly contradict the opening statement of the competition, as declared by the Executive Director of the CFI, “I'm proud that it was a young Canadian who came out on top - this was a very competitive international contest and I think Mr. Fisher did great by drawing on his personal knowledge of our environment and traditions while also pushing the envelope on small, environmentally friendly buildings.”

(English version revised by Chantal Auger)
Description
Community Forests International (CFI) is hosting a crowd-sourced architectural design competition for the backwoods cabin of the future. Bringing together visionary architects, artists, green builders and DIYers, the competition is CFI's first step towards establishing a Rural Innovation Campus at its 235 hectare farm and forest outside of Sussex, New Brunswick.

This Maritime-based campus will compliment CFI's parallel efforts overseas, where the organization has already begun constructing an equivalent institution on the island of Pemba, Tanzania. CFI will pair the two campuses closely, facilitating an international exchange of ideas and energy in our collaborative fight against climate change.

But first things first - how is CFI to accommodate students, innovators and guests at it's nascent Maritime campus in a way that best reflects the organization's goals and vision? At CFI we often look to the land for inspiration, and to natural systems for design solutions. Can our campus buildings blur the lines between humans and nature? CFI has opted to put this challenging design question to the greater conservation and sustainability community, through a wide-open public architecture competition. Anyone can apply - students, professionals, dreamers, and DIYers alike.

Entrants will have their design ideas displayed online and submissions will be judged by a panel of leading architects, artists, and builders. The winning designer will receive a $1,000 cash prize, and will see their vision become reality when CFI constructs the building at its Rural Innovation Campus in the summer of 2014.

"I think building a backwoods cabin is something we all dream about at some point in our lives. With this competition we're asking people to tap into those dreams and envision how we can get back to nature in the modern world - it's the sort of restorative action that we can all get excited about. "


CFI plans to bring people into the forest, to live, learn and innovate, and as part of our mission we want to demonstrate how humans can dwell in the world without destroying life sustaining ecosystems. More than that, we want to push the envelope and discover how our buildings can be designed to have a positive impact on the landscapes we live in. CFI is asking designers, architects, builders and DIYers to help us design a shelter for the future - a shelter that blurs the lines between humans and nature.

The Nomadic Cabin entry meets all of the competition requirements in spades. It is compact, easily constructed from local material, is easily movable, and is beautiful. The designers have also been very subtle and sophisticated in the key design move they have made - liek the trailers jacks to support the cabin. I have a sense that this design will become a popular approach for building rural cabins in the future, and could become an iconic feature of the Acadian Forest landscape. - Craig Applegath, Architect, PPOAA, AAA, Architect AIBC, NSAA, FRAIC, LEED AP.

We're all really excited to build the Nomadic Cabin - it's a brilliant concept and it fits our vision of strengthening people's connection to the land here in New Brunswick perfectly. And I'm proud that it was a young Canadian who came out on top - this was a very competitive international contest and I think Mr. Fisher did great by drawing on his personal knowledge of our environment and traditions while also pushing the envelope on small, environmentally friendly building. - Jeff Schnurr, CFI Executive Director

The transition between the forest and sheltered space in this design is really elegant - especially the vertical wood slat vestibule. I was also really drawn to the idea of a large skylight directly over the bunk - it makes sleeping out under the stars possible in any weather, any time of year; you get to enjoy nature without giving up all your creature comforts! - Zach melanson, CFI Communications Director

The Hearth entry is one of the most compellingly poetic and inspired entries submitted. It has a powerful, grounded shape, and a materiality that connects it to the forest in a most arresting manner. But it is the inspired idea of having the entire exterior of the cabin clad on horizontal wood planks for storing firewood that gives this form its subtle and somewhat subversive appeal. On the one hand this is a very practical design; on the other, it is a slightly surreal idea - one that would more likely be found in a deepest forest-air induced dream than in reality. - Craig Applegath, Architect, PPOAA, AAA, Architect AIBC, NSAA, FRAIC, LEED AP.

I think the horizontal slats are beautiful, even though they would probably trap moisture and rot in our climate. I just like the idea of people and wildlife being able to climb all over it! - Zach Melanson, CFI Communications Director

The Marlice entry is a very elegant cabin. The designers paid particular attention to both it's constructability and cost. It has an elegant form and would fit in quite nicely in the landscape. It's interior layout is also well thought out and will be comfortable for its inhabitants. - Craig Applegath, Architect, PPOAA, AAA, Architect AIBC, NSAA, FRAIC, LEED AP.