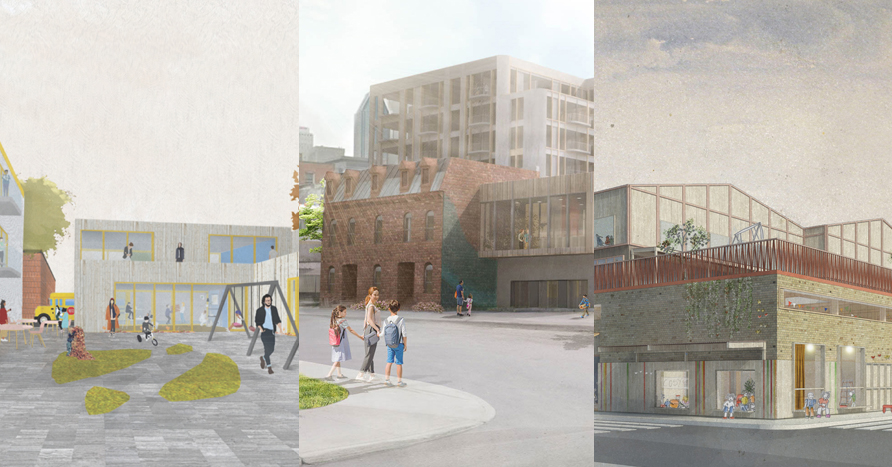 GENERAL INFORMATION ON THE COMPETITION
Description
Open to students in a master's program, the Between the School and the City competition is aimed at exploring new ideas for schools in dense urban environments. The themes explored will include places of transition, thresholds, informal space, the experience of citizens and children and the interfaces between school and the city.

The researchers located the project in Montreal in the Griffintown neighborhood, which has recently undergone major densification and where there are no public elementary schools. Some buildings in the chosen quadrilateral will have to be preserved.

In Montreal, as in many major Canadian cities, school design presents new challenges because the generalized model of the monofunctional building with an outdoor playground at the street level no longer corresponds to the land realities of downtown areas. However, school boards are struggling to change this model among government authorities and to encourage promoters to contribute to this change.

The Between the School and the City Idea Competition invites students to design a mixed-use architectural project that will include an elementary school, residential units and businesses. For practical and economic reasons, the school building would most likely be located on the first 3 or 4 floors. Some of its facilities could be shared with the public outside of school hours. Residential units would be mainly located on the upper floors while businesses would be located on the ground floor, on the street. The challenge of the competition is to reflect on the places "in between" located between the school and the city but also between spaces of different natures and functions.


(Web site excerpt)
Press Review
List of general documents
(not accessible)
IMPORTANT NOTICE : Unless otherwise indicated, photographs of buildings and projects are from professional or institutional archives. All reproduction is prohibited unless authorized by the architects, designers, office managers, consortiums or archives centers concerned. The researchers of the Canada Research Chair in Architecture, Competitions and Mediations of Excellence are not held responsible for any omissions or inaccuracies, but appreciate all comments and pertinent information that will permit necessary modifications during future updates.
info@ccc.umontreal.ca
Production