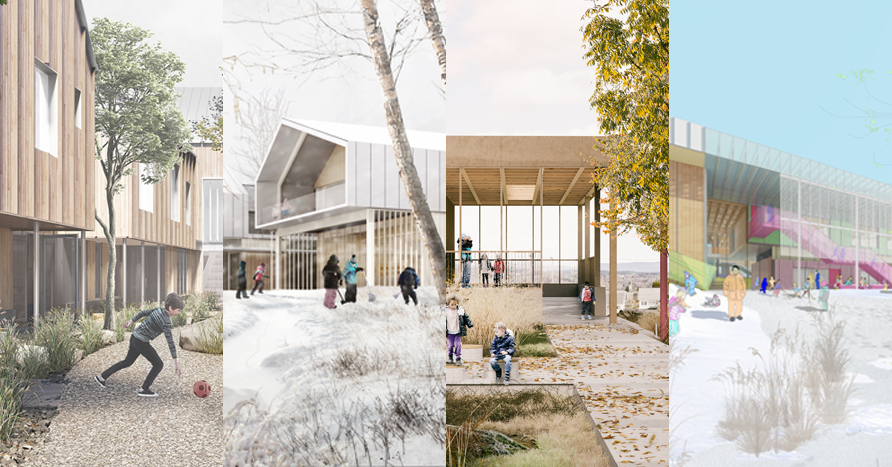 Editorial
Please, will you draw me an elementary school competition (about 5 competitions organized in Quebec by LAB-École in 2019-2020)
by Jean-Pierre Chupin, published 2020-08-23
In 2020, judging by the number of architecture competitions held in Quebec over the past two decades and the number of award-winning buildings, it is easier to find an excellent library than an elementary school worthy of the name. This series of 5 competitions - open and in two phases - organized by the LAB-École organization therefore confronted two contradictory convictions: the certainty that places of schooling forge and shape what we are since early childhood and this conviction, widespread among public decision-makers, that we could basically study and teach anywhere. Particularly well organized by LAB-École, these competitions show, on the contrary, that architecture is not a luxury, but a necessity. For contexts as different as Saguenay, Maskinongé, Rimouski, Gatineau and Shefford, the proposals prove to be rich in reflections demonstrating that the question of primary school remains complex and cannot be circumscribed in models that can be repeated - in blue, wood or aluminum - whatever the context.

The situation of elementary schools in Quebec has deteriorated to the point where it is the new national issue. Numerous studies on school architecture show the extraordinary attachment to the spaces and places that have accompanied, sometimes protected, and often built our childhoods. The old school would always be the most beautiful, the model that should be imposed on our children, so much so that many educational reforms have come up against this simple principle of attachment to the values of the past. In spite of political wishes or good architectural intentions, anyone who wants new educational structures, let alone new forms, should not impose new educational structures on the architecture of education. All the more so as the space of the first schooling is nowadays deployed in both physical and virtual registers. Moreover, many advocates of a pedagogical revolution essentially centred on digital technologies are hoping in this way to get around the obstacle of architectural quality.

Compared to practices in many countries, Canada organizes very few competitions for educational places. Of the 451 competitions held in the country since 1858, barely 8% are for education-related programs, mainly at the university level, and less than 2% for primary schools. Aside from the research-creation competition organized by LEAP in 2019 (see CCC, "Entre l’école et la ville") and, of course, the 5 LAB-École competitions, there remains only the remarkable historical case of the "provincial architecture competition for primary schools" organized in 1964 by the Government of Quebec (NB. Also documented in the CCC). There exists another competition held in Vancouver in 1970, but we have too little data to evaluate it. Subsequently, there were only a few largely university-based competitions in the 1970s and it was not until the 1990s that the aging building stock required further consultation and reflection. These were strongly encouraged by the numerous studies, often of a sociological nature, conducted in the Swiss, French and Scandinavian contexts. They will not have a significant influence on the introduction of competitions in Canada, despite the fact that in the late 1980s, a modest federal program led to an innovative school design process in British Columbia, thanks to Marie-Odile Marceau, then regional architect for the Department of Indian Affairs and Northern Development.

But, typically, and in contrast to the systematic recourse to competitions for school buildings in all European countries, it is legitimately surprising that schools have not been considered as a major architectural issue in North America. By comparison, there are few primary or secondary schools and sometimes kindergartens that have not gone through the competition process in countries such as France, Switzerland, Germany and all the Nordic countries that are now cited as examples in all discussions, in all articles and in the new competition programs in Quebec, including the five LAB-École competitions organized in 2019.

It will be argued that the competition procedure is not the only way to ensure architectural quality. No doubt, but the examination of the number of award-winning projects in the field of school architecture is just as distressing. Statistics, both in Quebec and in Canada, confirm the mistrust of educational authorities in the search for excellence or innovation. Over a period of four decades, less than thirty Canadian primary and secondary schools have been awarded prizes for excellence out of a total of several thousand achievements. In Quebec, the award-winning projects can be counted on the fingers of one hand: Baril Elementary School (2019), Saint-Louis College (2015), Barclay Elementary School (2014), Grande-Hermine Elementary School (2009) and Nikanik High School (1998).

Judging by the silence of Quebec public authorities since the 1964 competition, there is reason to fear that a revival of standardization – even if it focuses on the warmth of wood, the colour of the sky and the beautiful industrial coldness of aluminum – is nothing more than a repetition of past mistakes. Public policy shyness about the architectural quality of school buildings also means that designers – like researchers – need to better base their arguments and data when explaining that architectural quality helps to determine learning conditions and even supports academic success.

It is in this context that one must discover the abundant wealth of projects submitted to the various competitions organized by the LAB-École. While we sometimes focus on the 20 finalists divided into 5 sites, we must not forget the 140 other proposals conceived in the first phase of this rare series of open competitions. It is not the least merit of the LAB-École organization, under the impetus of architect Pierre Thibault and professional advisor Nicolas Marier, to have insisted that these competitions be open to all architects in the province. It should also be pointed out that LAB-École did not simply organize competitions, but that it revisited the architectural programs of Quebec's elementary schools by making the best use of the constraint of allocated areas or by redefining school spaces. Finally, each competition program was the subject of consultations with representatives of the communities concerned, while the juries included some of these local players. It was therefore not a centralizing vision of the school, but rather a case-by-case commitment.

Of course, the best architecture will not be a substitute for the resources devoted to education. One cannot separate the quality of schooling facilities from the quality of pedagogical supervision. The fact remains that the best of teachers cannot teach in the same way anywhere, including, and perhaps above all, by interposed screens. Many so-called civilized countries systematically organize competitions for schools, for each school. Why should it be any different in Quebec?

Jean-Pierre Chupin
Description
This project consists of the design of a new 3440 sq. m. building on the site of the existing Marguerite-D'Youville School. This new school will accommodate students from preschool to Grade 6 and will have 15 classrooms, including 3 preschool and 12 elementary school classes, 1 single gymnasium, as well as gathering spaces for collaboration and eating.

The site of the new school is located in Saint-Joachim Park on Boily Street in the Saint-Joachim neighbourhood near downtown Chicoutimi in Saguenay.

The construction of the Marguerite-D'Youville school will create an inclusive living environment to integrate more students, stimulating sports spaces, and more facilities shared with the community.

Publication of the notice of competition and availability of competition documents: 12 August 2019
End of competitors' question period: 26 August 2019
Deadline for submission of replies and addenda: 05 September 2019
Submission of anonymous proposals: 16 September 2019
Jury consideration of proposals: September 18, 2019
Work of the juries and live deliberations of the selection of finalists: 01 October 2019
Transmission of the jury's decision to the contractor: 11 October 2019
Notification to the finalists concerned of the selection of their applications: 15 October 2019
Announcement of finalists: October 15, 2019