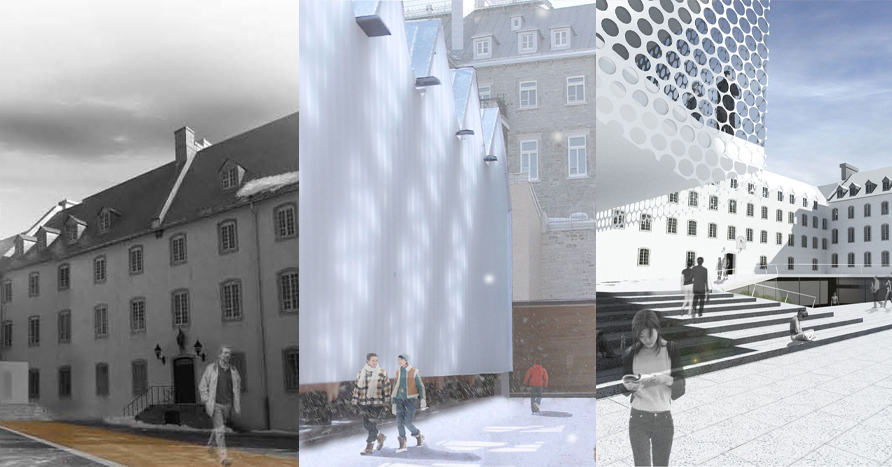 From its founding in 1960, the School of Architecture at Laval University strived to be a modern school, run by young professionals. Paradoxically, the school is housed within one of the oldest buildings in Canada: the Seminary of Quebec. Built from the end of the 17th century to the end of the 19th century, the Seminary is a dominant structure, without equal in the city. Its vast quad breaks with the geometry and scale of the surrounding streets, whereas its rooftops and steeples blend with the views of Old Québec.

As much as the Seminary stands out in the genral landscape, at street level it is austere and introverted. In fact, the school is practically invisible to the untrained eye… located mainly on the upper floors, and facing the courtyard rather than the street. Consequently, the competition brief asked the competitors to rethink the school's relationship to the site, through the use of new equipment, the reorientation of the public circulation, and the creation of a symbol that would promote the school (and, by extension, architectural creation) within the city. The exact nature of the new functions and their implementation are left to the competitor.

Despite these rather modest ambitions, the competition's name – Ajout Manifeste – possesses a certain provocative nature, hoping that a simple addition to a heritage building could spark controversy. Indeed, in the modernism of the beginning of the 20th century, the manifesto calls for rupture, a time to theorize new goals and means for architecture, and consequently, a new foundation for architectural practice. From this standpoint, the competition implicitly invited competitors to rethink an architect's training, with regard to history, materials and technology.

Was the promise kept? Not entirely. Despite nearly a hundred submittals from several countries, the six projects selected and exposed at Laval University in spring 2011 reflect profound indecisiveness between two opposing approaches. The jury and competitors alike were undecided weather the manifesto is a theoretical program or a spectacular object.

Among the six winning projects, three responded to the competition's problematic by highlighting the formal autonomy of the intervention. Based on the prior evolution of the Seminary by the addition of new wings, Aljebouri‘s winning project proposes a new volume, inserted within the existing circulations on the site. The implementation stems from a freehand gesture, which pierces the walls of the Seminary's courtyard in order to reveal the hitherto concealed river landscape. The autonomy of this addition is solidified by the dynamic promenade as well as the cantilevered structure, which projects the visitor into emptiness. Despite the project's many spectacular qualities, the project is only a reiteration of the picturesque vision that reconfigured Québec at the end of the 19th century, where architecture and the city are merely eye candy.

Optical qualities also dominate Decq's project, one of the honourable mentions. The project consists of a shimmering bean placed in the middle of the Seminary's courtyard, with only a visual relationship between the existing buildings and the addition. The new volume is a hermetically sealed programmatic box, which animates and sculpts the courtyard without participating in school life. The most interesting aspect of the project is without a doubt the ambiguity it proposes between autonomy and inflection. The addition is generated by a sphere, which slowly deforms while in contact with the physical site. On the contrary, the Seminary's façades are deformed, even dissolved, by the complex stereometry of the addition's reflective skin.

In a more conservative vein, Kim's winning project focuses on historical fiction by building the “fourth side” of the courtyard, which was never realized. The contemporary feel of the intervention translates into a game of similarity/dissimilarity with the existing buildings. While borrowing narrow plans and pitched roofs from the original construction, the project subverts the historic model by making the new volume float above a sunken courtyard, and by substituting the traditional window with a light and translucent outer shell.

All things considered, the most energetic and provocative projects are those that bet on the theoretic or educational potential of the addition. Thus, Boucher's project, which garnered a honourable mention, seems at first glance to present a contemporary formal paradigm: architecture as an atmospheric bubble, liberated from earthly gravity and the weight of the past. That is not the case however, for the abstract spheres that constitute the intervention are in fact “found objects”, a reference to Buckminster Fuller, Haus-Rucker-Co and Rem Koolhaas. The “new” is in fact the old, as suggest the designers, and all architecture is but a reference to, and recycling, of history.

In contrast to this disenchanted vision, HBGB's winning proposal states loud and clear its utopianism and cavalier approach. With a resounding “schlack!” the authors cut, lift and suspend the Seminary's buildings into the air in order to insert a playful megastructure dedicated to mutant arts. Inspired by collage, comics and photomontages à la Superstudio, the project features an educational aspect without the need for teachers, where students roam freely, blissfully, in a fluid and boundless interior, laptops in hand.

In a more practical approach, Lapalme's winning project, which doesn't contest the basis of the design competition, articulates a vision of the School of Architecture based on the daily use and mastery of technical elements. It is not an emblem, but an iconoclast “shed” which advocates production over exhibition, prototype over final image, and loading dock over public entry. The project is based on an ethical position which favors minimal but necessary actions, as well as the rigor of the plastic effect design process.

Among the disappointments of the design competition, it is necessary to mention the almost total absence of projects dealing with the new digital culture and its possible dialogue with more ancient artifacts from a bygone age of manual and artisanal production. Equally as surprising is the small number of projects that sought to establish a concrete and daily link with the old city at the gates of the school. Nearly fifty years ago, the Austrian architect Hans Hollein was already parodying the tendency for modern architecture to produce unusual monuments in a blank landscape though his work with surrealist photomontages (such as Aircraft Carrier City in Landscape, 1964). A large number of entries in the competition seem to have followed the same process – unfortunately without the same sense of irony.

To commemorate the 50th anniversary of its founding in Quebec City, the University Laval School of Architecture hosted an ideas competition for an «emblematic addition» to its heritage building. Situated within the fortification walls of Quebec City, the School of Architecture reflects on building for the future in a city rich in layers of the past. This competition, open to practitioners, faculty, students and intern architects, provided an opportunity to reflect upon a universal problematic: how to build the city of tomorrow in the complex urban fabric of the past.